The Mississippi Delta was shining
Like a National guitar,
I am following the river
Down the highway
Through the cradle of the civil war,

I’m going to Graceland, Graceland
In Memphis Tennessee…
…I’ve reason to believe
We both will be received
In Graceland

Today is the birthday of the King of Rock ‘n’ Roll Elvis Presley. Though not an official holiday in any nation, it is observed throughout the world.

(Above: the author praises the King in Memphis, Tennessee)

The focal point of the celebration is Graceland, Elvis’s former home in Memphis, Tennessee. Festivities begin each year with a gospel tribute at the Gates of Graceland at midnight.

Graceland was not named by Elvis, but by the original owner S.E. Toof after his daughter Grace.

Elvis Presley was born in Tupelo, Mississippi. At age 13 the Presley family moved to Memphis, Tennessee, where Elvis lived for most of his life.

In 1957 the 22 year-old superstar purchased the Graceland mansion in Memphis. He was proud to move his parents into it, a long way from the two-room house where Elvis was raised. His mother Gladys died the following year. 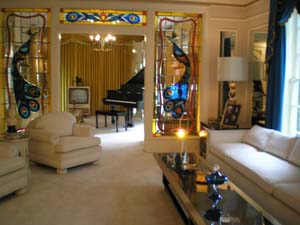 Early viewers of Elvis’s concerts, such as rock legend Roy Orbison, cite his instinct and incredible energy as a performer as separating him from the artists before him. It is difficult to convey the novelty of Elvis after the half-century of imitations and changes that followed. Various morality groups assailed him for his “vulgar” and “obscene” music and movements on stage.

His discoverer, Sam Phillipsof Sun Studios, said Elvis “put every ounce of emotion…into every song, almost as if he was incapable of holding back.”

When Elvis first entered the Sun Studios, receptionist Marion Keisker asked him who he sounded like. He is reported to have said “I don’t sound like nobody.”

While this was true in mainstream radio, Elvis was heavily influenced by the black gospel singers he had seen at Memphis’ Ellis Auditorium and black blues performers in the clubs along Beale Street.

Stories make it sound like Elvis walked into Sun Studios and the rest is history, but in fact, after his first recording in 1953, Elvis politely hassled Sam Phillips for a year—while working as a truck driver—before Sam teamed him up with bassist Bill Black and guitarist Scotty Moore. The three recorded a high-energy version of black R&B artist Arthur Crudup’s “That’s All Right, Mama” in July and the single was released that month. Some white disc jockeys refused to play Elvis’ music at first, believing Elvis was black.

In January 1956 RCA released Heartbreak Hotel, co-written by a part-time Florida schoolteacher Mae Boren Axton, who was inspired by the newspaper epitaph of a suicide victim: “I walk a lonely street.”

Heartbreak Hotel slowly and steadily climbed the charts, entering at #1 68 in March, and making its way to #1 in May.

Elvis the #1 Hits: The Secret History of the Classics

Though Graceland is considered the musical Mecca for Elvis fans, do not miss Sun Studios just to the east on Union Avenue, for a more in-depth historically revealing tour about Elvis and Memphis music history.

One Reply to “Birthday of the King: Elvis”