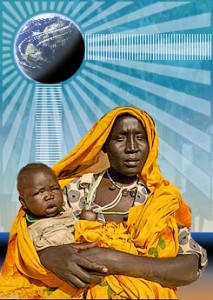 60 years after the adoption of the universal declaration of human rights, million of people are still deprived of basic human rights such as food, housing and decent working conditions.

On October 17, 1987, over 100,000 people gathered at the Trocadero in Paris, the site of the signing of the Universal Declaration of Human Rights in 1948, to protest and draw awareness to the problem of poverty around the globe.

The Declaration covers the basic rights of human beings, from the very broad…

All human beings are born free and equal in dignity and rights. They are endowed with reason and conscience and should act towards one another in a spirit of brotherhood. (Article 1)

to the more specific….

Everyone has the right to a standard of living adequate for the health and well-being of himself and of his family, including food, clothing, housing and medical care and necessary social services… (Article 24)

For the 5th anniversary of the 1997 demonstration, the United Nations declared October 17 “International Day to Eradicate Poverty.”

Today, while three-quarters of the world’s income is in the hands of the richest 20%, the poorest 40% of the world’s population accounts for just 5% of global income.

Hans Rosling: New insights on poverty and life around the world