On this day in 1878 Harper’s Weekly published the following cartoon protesting the renewal of the Federal income tax. The tax had been levied during the Civil War, and abolished in 1872. 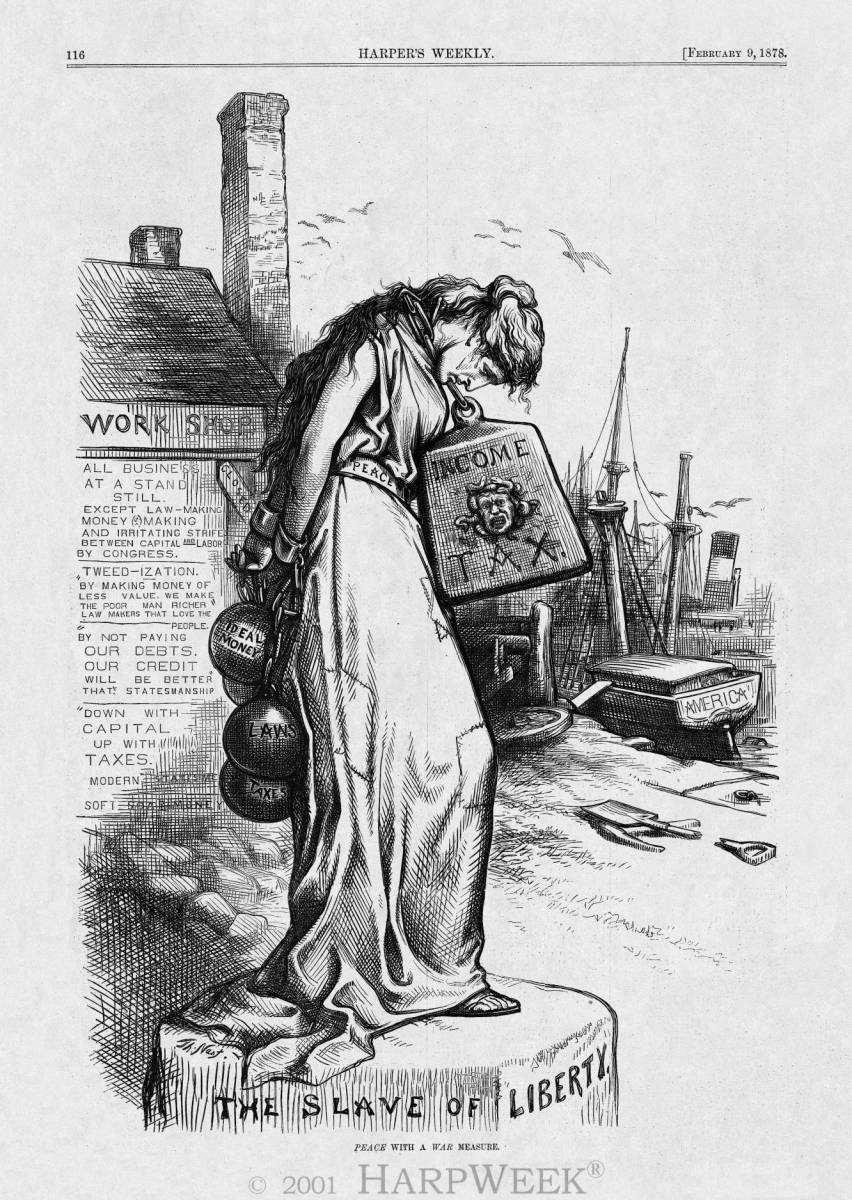 “It is estimated that over 40% of all cancer can be prevented.”

In a world where our ability to combat and prevent disease has never been better, cancer rates are still on the rise. According to the World Health Organization cancer is “a leading cause of death globally.” 7.6 million people died of cancer in 2005. 84 million people are projected to die from cancer in the next decade.

Rosa Parks in 1913. Her decision to be arrested rather than give up her seat to a white passenger on a Montgomery bus led to a year-long boycott and sparked the Civil Rights movement in 1955.

Dietrich Bonhoeffer in 1906. As a German pastor he opposed the Nazi government. He was executed in 1945 for his involvement in a plot to kill Hitler.

Misery is expected to peak today, the third Monday in January being the “most depressing day” of the year.

[Note: you can say things like “is expected to” if one person expects it to be true.]

That one person is Cliff Arnalls of Wales, who created the formula to determine the worst day of the year.

[Note: if I can find someone who agrees with him, I can write: “Researchers agree…”]

NA = the need to take action

(The BBC describes Cliff as a part-time tutor at University of Cardiff in Wales, although one week later MSNBC promoted him to Dr. Arnall, a psychologist specializing in seasonal disorders. Apparently American educational standards are more lax.)

Even though the shortest day of the year is December 21st, the weather continues getting colder throughout the month of January. In fact, in ancient Rome the calendar year originally started in March and ended in December. The months of January and February were just one big amorphous clump of days, as the calendar was used mainly for agricultural purposes and was based on lunar cycles rather than solar.  In the 700s BC January and February were “created” to fill in the gap.

By a couple weeks into the new year the energy of the holidays has long dissipated, folks have failed all or most of their resolutions, and their bank accounts are still empty.

The airlines, however, recognize the date as the time when people are most likely to book a vacation.

“People feel bleak when they have nothing planned, but once they book a holiday they have a goal, they work toward having time off and a relaxing period,” — spokesperson for Porter Novelli, the PR agency for Sky Travel.

I’m buying into the vacation-booking theory, since my folks just booked their vacation last night.

Tips for making it through Blue Monday:

“Have a party and celebrate” – Jack Gilbert, Ontario, Canada

Thank you, New Zealand, for rubbing that in.

On this day in 1783, the most powerful man in the Western Hemisphere, the Commander-in-Chief of the Army of the United States who had achieved independence from Britain, the world’s strongest superpower, voluntarily surrendered his sword and his title to the Continental Congress in Annapolis, Maryland. He returned to his home in Mount Vernon, Virginia, expecting to live a quiet farm life.

His plans were derailed a few years later when he was elected to serve as President of the 1787 Constitutional Convention in Philadelphia.