June 16 is Bloomsday (also Blooms Day) in Dublin, but it’s not a spring or solstice festival and it has nothing to do with Irish wildflowers.

No, Bloomsday honours Leopold Bloom, who spent a day traipsing through the streets of Dublin on June 16, 1904—in James Joyce’s classic novel Ulysses.

Each year on Bloomsday, Joyce lovers retrace the steps of the fictional characters Leopold Bloom and Stephen Dedalus. Many old landmarks remain, though their functions may have changed:

“The house at 7 Eccles Street [Bloom’s home] now serves as home to part of the Mater Hospital Private Clinic… All Hollows Church, now Saint Andrews Church, still stands, as does the chemist shop where Bloom purchased a bar of lemon soap… Bella Cohen’s brothel now serves as a retreat house for Sisters of Our Lady of Charity.”

Martello tower in Sandycove now hosts the James Joyce Museum. Here, and along O’Connell Street, aficionados begin Bloomsday by enjoying a hearty breakfast, emulating that of Leopold Bloom…although many choose to skip the “grilled mutton kidneys which gave to his palate a fine tang of faintly scented urine” in favor of extra sausages and Guinness.

First published in its entirety in 1922, most of Ulysses had been serialized in Margaret Anderson’s The Little Review from 1918 until 1920, the year it was banned in the U.S. due to frank descriptions of bodily functions and sexuality, as well as its commentary on organized religion and social mores.

“did not tend to excite sexual impulses or lustful thoughts but that its net effect on [my colleagues] was only that of a somewhat tragic and very powerful commentary on the inner lives of men and women.”

Ulysses was the original ‘24‘, and Bloom its Jack Bauer. Each of its 18 chapters documents approximately one hour in the life of Leopold Bloom (though the first few chapters follow Stephen Dedalus). The entire novel takes place in under 24 hours, beginning around 8:00 am on Thursday, June 16, 1904, and ending before dawn the next day. 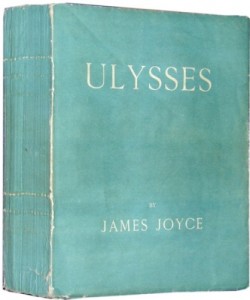 With its stream-of-consciousness narrative, Ulysses was both a watershed moment in 20th century literature and the bane of English students for generations to come.

Joyce’s title juxtaposes the mundane experiences of Bloom’s romp through Dublin with the grandiose adventures of the ancient Greek hero Odysseus (Ulysses). Bloom’s wife Molly represents Penelope, and Stephen Dedalus (Joyce’s  alter-ego from A Portrait of the Artist as a Young Man) mirrors Telemachus.

For all the immortalizing Joyce did for the city of Dublin, the author supposedly never set foot in the town after 1912. He spent the last two decades of his life in Paris and Switzerland, and  died in 1941 in Zurich after an ulcer operation.

— God, he said quietly. Isn’t the sea what Algy calls it: a great sweet mother? The snotgreen sea. The scrotumtightening sea. Epi oinopa ponton. Ah, Dedalus, the Greeks. I must teach you. You must read them in the original.

When the going gets tough, the tough go green. And the hard times haven’t dimmed the green glow (or watered down the green beer) of St. Patrick’s Day from the Emerald Isle to North America.

For a run-down of the slave-turned-priest who we celebrate today, check out last year’s St. Patrick’s Day post: Green is Good.

This year we travel around the world to see how St. Patrick’s Day is celebrated in different cities.

American Servicemen and women in Baghdad held their first (and possibly last) St. Patrick’s Day Parades. It was considerably smaller than, say, New York’s festivities, but the tiny procession drew a respectable amount of confused looks from curious Iraqis. AFP

In New Orleans, the St. Patrick’s parades are second only to Carnival/Mardi Gras. Instead of throwing beads, float-riders threw food: full heads of cabbage, carrots, and potatoes. “Everything you need to make an Irish stew, minus the meat,” says New Orleans native Odin (yes, that’s his real name). And that’s exactly what participants do with it. “And if you’re a mother with kids, forget it.You’ll go home with more food than you could eat in a month.”

But watch out for large flying edible projectiles!

The St. Patrick’s Day parade in Toronto is relatively young, but gaining in popularity. The Irish have a long tradition in Canada’s largest city. According to toronto.ctv.ca:

In the U.S. the two most famous celebrations are the parades in Boston and New York.

John “Wacko” Hurley has helped organize the Boston St. Patrick’s Day parade for a half-century and has been its lead organizer for the past two decades.

The New York parade dates back to 1766 and is one of the city’s oldest annual traditions. It was originally organized by military units before falling upon the shoulders of Irish fraternal clubs in 1811.

A few years back the New York St. Patrick’s Day parade counted 150,000 participants. That’s marchers alone, not spectators. The people lining the parade route and watching on TV numbered in the millions.

And of course there’s Ireland. Surprisingly Ireland held a disappointing, lackluster St. Patrick’s Day celebration until recently. It wasn’t until 1996 that Dublin, inspired by the success of fanfare overseas, held it’s first major St. Patrick’s Day festival. Amazingly, that first crowd numbered over 400,000. Today the festival has grown to six full days of activities, and visitors to the festival number over a million.

Wherever you celebrate today, there’s a good chance you’re a stone’s throw away from an Irish pub.

And if not, you can always go throw cabbage at someone.

Let us know how that goes! 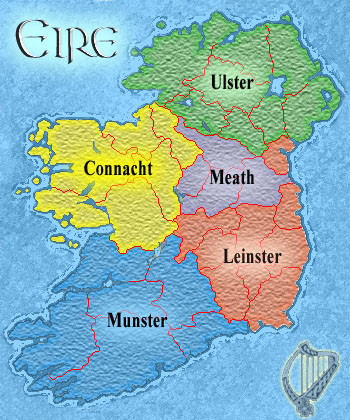 Today the Irish are as inseparable from the American identity as the stars on the red, white, and blue. But at one time the Irish were as discriminated against as any ethnic group. Immigrants who had crossed the Atlantic, fleeing the Emerald Isle’s deadly potato famine in the 1840s soon learned what N.I.N.A. stood for–No Irish Need Apply.

The wave of German and Irish-Catholic immigration in the mid 19th century was met with an equal wave of xenophobia called Nativism, an anti-Catholic, anti-foreigner movement sweeping through the mostly-Protestant states. This patriotic sentiment was compounded with a territorial war with our neighbor to the south, Mexico, in the 1840s.

John Riley, a native of Clifden, County Galway, was a young veteran of the British Army when he entered the U.S. through Canada. He joined the army in Michigan, and served in the 5th U.S. Infantry Regiment. But the animosity he experience against his religion and his countrymen caused him to desert the army prior to the Mexican-American War.

All told around 1000 Irish deserted the army before and during the war. They were not the first soldiers to do so, but 200 of them did the unforgivable. They banded together and enlisted with their fellow Catholics in the Mexican Army.

The St. Patrick’s Battalion, or San Patricios, fought in all five major battles of the Mexican-American War. General Santa Anna once said, had he a hundred more troops like Riley’s men, he would have won the war.

At the Battle of Churubusco in 1847, the San Patricios met their end. Of approximately 200 men, 35 were killed and 85 were taken prisoner. Nearly 50 prisoners were sentenced to death by hanging. Riley escaped execution because he had deserted prior to the declaration of war. He was merely given 50 lashes on the back, branded with the letter “D” (for deserter), and forced to wear an iron yoke around his neck for the duration of the war.

The prisoners were hanged between September 10 and September 13, by order of General Winfield Scott, in full view of both armies at the battle of Chapultepec, and were forced to watch from the gallows as the U.S. flag replaced the Mexican flag above the town. The victims included one soldier who had had both legs amputated the day before.

The U.S. Army denied the existence of the St. Patrick’s Battalion until a Congressional investigation in 1915.

In Mexico, the Irish martyrs are remembered during two holidays: St. Patrick’s Day on March 17, and the Commemoracion de los San Patricios on September 12, the anniversary of most of the executions.

And on this one day, Riley’s hometown of Clifden, Ireland, flies the Mexican flag in honor of the men of St. Patrick’s Battalion.