Year of the Ox:

Ox: You are a born leader, and you inspire confidence in those around you. You speak little, but are quite eloquent.  You are steadfast, solid, hard-working, goal-oriented, mentally and physically alert and generally easy-going, but remarkably stubborn. Be careful about being too demanding. You are also methodical and good with your hands. You will make a good surgeon, general or hairdresser.

Actually they don’t have Chinese fortune cookies in China. Fortune cookies are an American thing.  Although the Chinese did hide secret messages in Moon Cakes way back in the 14th century, the closest cookie you’ll find to the modern incarnation date from 1800’s Japan.

The legend is that fortune cookies were brought to North America by Chinese laborers around the time of the 1849 Gold Rush, but there’s no evidence of this.

They were probably were introduced in the U.S. by a Japanese immigrant in San Francisco in the 1910’s. Another claim is that they were made by a Chinese restaurant owner in L.A. So the question isn’t are they Japanese or Chinese, but are they Northern Californian or Southern Californian?

Fortune cookies became a staple at Chinese restaurants in the U.S. after World War II. 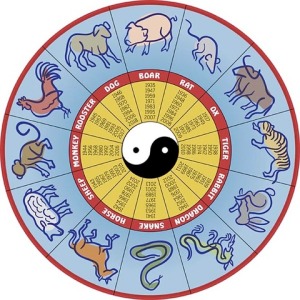 The Chinese Lunar Calendar is one of the oldest calendars in the world, and probably the oldest known horoscope.

The Rat is the first year of the 12-year cycle. An ancient legend explains the order of the animals. The twelve animals of the zodiac quarreled with each over who would be first, and the gods were asked to decide. A race was held, in which the 12 animals of the zodiac had to cross a river.

Ox was the first across the river. Little did he know Rat had hitched a ride on his back, and Rat darted across the finish line when they reached the other side. For this reason Ox is second.

Perhaps because of Rat’s savvy, “Years of the Rat” always coincide with a U.S. Presidential election. Since 1900, “Year of the Rat” elections have re-elected the sitting President, with the exceptions of 1912 (Wilson), 1960 (Kennedy), and 2008 (Obama).

Today marks the beginning of the year of the Ox.

Barack Obama is one of two “Oxes” to be elected President. [Gerald Ford and Chester Arthur were also “Oxes” but took over for resigning and assassinated Presidents.] The other was Warren G. Harding, who died in office, and whom until recently, many historians considered to be the country’s worst President.

15 Presidents (5 each) have been Rats (including George Washington), Snakes (FDR & JFK),  and Pigs (Jefferson, Jackson, Reagan).

“The ancient Chinese attributed the origin of all life to the balance between heaven and Earth, and the yin and the yang.”

Chinese New Year is one of the most widely celebrated holidays in the world.