The Torah is comprised of the first five books of the Bible, also known as the Pentateuch. Portions are read in the synagogue throughout the year, from the first chapter of Genesis (“In the beginning, God created the heavens and the earth”) to the last chapter of Deuteronomy (“The Death of Moses”).

In Hebrew it’s called Bereshit, or “In the Beginning.”

Genesis is the “fun” book. Nearly all the Sunday school stories of the Torah hail from Genesis. This includes Adam and Eve, Noah, Abraham (the patriarch of Islam, Judaism, and Christianity) and Abe’s male line: his son Isaac, grandson Jacob, and great-grandson Joseph (the one with the amazing technicolor dreamcoat, if you’re into that kind of thing.) 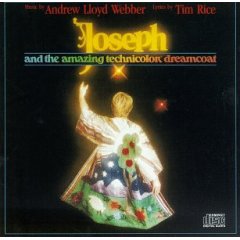 In Hebrew it’s Shemot, or “Names.” But the Greeks added some pizzaz. The Exodus tells the story of Charlton Heston, or “Moses”, in Egypt. It includes the Ten Plagues, the parting of the Red Sea, and the Ten Commandments, which God gave Moses to civilize the ancient Hebrews when they were cow-worshippers in the desert. (And which Cecil B. DeMille reintroduced to Americans when they were flappers in ’20s.)

The Levites were one of the twelve tribes of Israel, descended from Jacob. In Hebrew the book is Viyakra, “He Called”.

If you’ve ever read the Bible cover to cover (you have way too much free time on your hands, and) you know that Leviticus is where it starts to get wild, if not repetitive. Here, God gives one of his many gentle yet firm encouragements to follow his commands:

27 ” ‘If in spite of this you still do not listen to me but continue to be hostile toward me, 28 then in my anger I will be hostile toward you, and I myself will punish you for your sins seven times over. 29 You will eat the flesh of your sons and the flesh of your daughters. 30 I will destroy your high places, cut down your incense altars and pile your dead bodies on the lifeless forms of your idols, and I will abhor you. 31 I will turn your cities into ruins and lay waste your sanctuaries, and I will take no delight in the pleasing aroma of your offerings. 32 I will lay waste the land, so that your enemies who live there will be appalled. 33 I will scatter you among the nations and will draw out my sword and pursue you. Your land will be laid waste, and your cities will lie in ruins.

Leviticus also the book that gives us the legal precedent behind California Propositions:

Thou shall not lie with a man as thou lies with a woman.

In the Hebrew: Bamidbar, “In the Wilderness…”

Don’t let the Hebrew fool you. The name “Numbers” is more representative of how exciting it is. Numbers contains detailed census information about the twelve tribes during the forty years in the desert. But Numbers is also the source of alien-conspiracy theories since time immemorial:

Finally we get to Deuteronomy, or “Second Law.” A look back on the Laws of Moses before his death. In Hebrew it’s Devarim: “Things.”

Although t-shirts today proudly proclaim the wisdom of Leviticus 18:22, fewer espouse the need to follow to the letter of the law Deuteronomy 22:

13 If a man takes a wife and, after lying with her, dislikes her 14 and slanders her and gives her a bad name, saying, “I married this woman, but when I approached her, I did not find proof of her virginity,” 15 then the girl’s father and mother shall bring proof that she was a virgin to the town elders at the gate… Then her parents shall display the cloth before the elders of the town, 18 and the elders shall take the man and punish him. 19 They shall fine him a hundred shekels of silver…

20 If, however, the charge is true and no proof of the girl’s virginity can be found, 21 she shall be brought to the door of her father’s house and there the men of her town shall stone her to death…

Although that would make a catchy t-shirt! 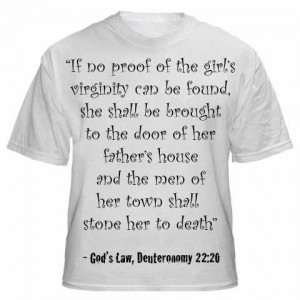 All told, the Hebrew Bible contains not ten but 613 Commandments. That’s right, Christians have it easy. Try remembering all these puppies.

Deuteronomy and the Torah end with the death of Moses, Judaism’s greatest prophet.

No one has ever shown the mighty power or performed the awesome deeds that Moses did in the sight of all Israel.

One Reply to “Simchat Torah”