St. Patrick is world-famous for driving the snakes out of Ireland, but the day before St. Patrick’s Day we celebrate an oft-overlooked saint named Urho, who is said to have performed the equally admirable feat of ridding his Finnish homeland of hungry grasshoppers, thus saving Finland’s all-important grape crop, and the Finns themselves, from devastation.

Plaques proclaim St. Urho’s glory, including one in Minnesota that describes the annual ceremony in his honor:

At sunrise on March 16, Finnish women and children dressed in royal purple and nile green gather around the shores of the many lakes in Finland and chant what St. Urho chanted many years ago: “Heinäsirkka, heinäsirkka, mene täältä hiiteen” (Grasshopper, grasshopper, go away!”

Urho’s deeds are recalled in poems like The Legend of Saint Urho, by Linda Johnson. Statues have been erected in his honor. His feast day is celebrated with relish by Finnish communities throughout Minnesota.

But before you go impressing your Finnish friends with all your knowledge about their culture, you should know that, while St. Urho is a symbol of pride for many Finnish-Americans, sadly the Finns themselves are all but ignorant of their great national hero. (Or of the notion that grapes grew there.)

This is because St. Urho is a completely made-up saint. He was conjured up and popularized by Finnish-Americans (most-likely intoxicated) in Minnesota in the mid-1950’s.

Envious of the attention paid to Ireland’s patron saint on May 17, Finnish Minnesotans, created their own hero, possibly inspired by the name of then Finnish Prime Minister Urho Kekkonen. There is some debate over who is to blame—I mean, who is responsible for inventing the now world-famous saint.

“[Gene] McCavic, a co-worker at Ketola’s Department Store, chided me in 1953 that the Finns did not have saints like St. Patrick. I told her the Irish aren’t the only ones with great saints. She asked me to name one for the Finns. So I fabricated a story and thought of St. Eero (Eric), St. Jussi (John), and St. Urho. Urho, a common Finnish name, had a more commanding sound.” 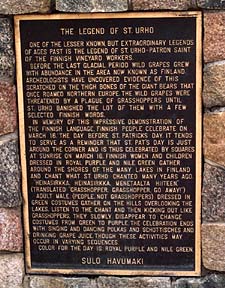 Mattson’s original St. Urho rid Finland of its frogs, not grasshoppers, a tradition that changed over time.

Soon, the employees of Ketola’s came to respect the Finnish saint, or at least their manager’s Finnish dry humor, and began throwing “St. Urho’s Day” parties as an inside joke for their beloved manager.

The story of St. Urho was reported in the Mesabi Daily News in 1956. That may be where Sulo Havumaki, a school district psychologist in Benmidji, Minnesota got wind of it.

“Sulo was a devout Catholic and, feeling left out because there weren’t any Finnish saints, made one up with tongue in cheek: St. Urho (Maybe he adopted Mattson’s…)” — William Reid

Sulo’s devotion to the obscure saint was well-known in the town. One story goes that when a neighbor’s family took a trip to Finland, they played a rather unusual practical joke on Sulo. They took some very old bones and wood with them and arriving in Finland, found a recent obituary in a Finnish newspaper. From Finland they shipped the wood and bones to Sulo along with a fictitious letter, in the name of the recently deceased…

“Sulo received the letter, which said something like “Dear Prof. Havumaki: I am the keeper of the last relics of St. Urho. News of your faith and dedication to St. Urho have reached me across the ocean. I am dying, and commend to you those last relics because I know you will protect and revere them, and pass them to the next custodian when the time is right…”

Sulo took the saint and ran with it, codifying much of the lore and the rites of the festival that is St. Urho’s Day.

Regardless of the saint’s origin, St. Urho’s Day is a very real reason (excuse) for Finnish-Americans to throw parties and drink beer in his honor.

For these true-believers, St. Patrick’s Day is merely “Hangover Day.”

…So let’s give a cheer in hower pest vay
On Sixteenth of March, St. Urho’s Tay.