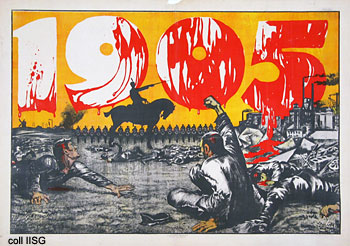 “We, workers and inhabitants of the city of St. Petersburg, members of various sosloviia, our wives, children, and helpless aged parents, have come to you, Sovereign, to seek justice and protection…”

Thus began a petition to Nicholas II, Czar of Russia, protesting the working and living conditions in St. Petersburg.

The peaceful protest was led by a Russian Orthodox priest named Father George Gapon, a “simple-hearted priest, with a rather childlike faith in God and Tsar,” according to Henry Woodd Nevison (The Dawn in Russia, 1906)

A massive December strike at 174 factories, including the electricity plant, had paralyzed the city. Gapon led approximately 15,000 workers and their families to the Tsar’s Winter Palace with their list of grievances.

According to Nevinson, “Father Gapon organized a dutiful appeal of the Russian workmen to the tender-hearted autocrat whose benevolence was only thwarted by evil counsellors and his ignorance of the truth.”

Father Gapon was the chief scribe of the petition to the Czar. It asked for an 8-hour work day, freedom of assembly to unionize, improved working conditions, medical aid, higher wages for women, freedom of speech, press and religion, and an end to the Japanese war.

“If you do not respond to our prayer, then we shall die here, on this square, in front of your palace. We have nowhere else to go and no reason to. There are only two roads for us, one to freedom and happiness, the other to the grave. Let our lives be sacrificed for suffering Russia. We do not regret that sacrifice, we embrace it eagerly.”

Despite this claim, the workers and their families did not seem so willing to embrace their fate after 200 of their number had been slaughtered via bayonet and bullet by the Czar’s guards as they approached the palace. (Nevinson claims 1500 dead. The government’s official count was 100.) Hundreds more were injured.

The Czar didn’t get the petition.

Having been warned of the Sunday march Nicholas had skipped town.

Word circulated about the country, and the numbers of the dead increased with each telling. In Moscow and other cities angry workers rioted, demonstrations turned violent, and thus began the Russian Revolution of 1905.

Father Gapon was not killed in the massacre, though many  around him were. He sneaked out of the country, making his way to Western capitals such as Paris, London and Geneva, to garner international support for the cause.

Strangely enough, word leaked that Gapon was not only a friend of labor, but also a double agent working for the Okhrana, the Czar’s secret police. The Okhrana clandestinely created or infiltrated union assemblies in order to snuff out the agitators and arrest them.

Gapon’s intentions before the massacre, whether he had any idea of the outcome, will never be know for sure. Nor will we know if, horrified by the events of Bloody Sunday, Gapon’s newfound anger toward the Czar was sincere. It may well have been.

What is known is that soon after his return to Russia, his dead body was found with a rope around his neck in an empty cottage outside the village of Ozerki, Finland.

And an unsigned letter published in a St. Petersburg newspaper read:

George Gapon had been tried by a workmen’s secret tribunal and had been found guilty of having acted as an agent provocateur, of having squandered the money of the workmen, and of having defiled the honor and memory of the comrades who fell on the “Red Sunday.” In consequence of these acts, of which he was said to have made a full confession to the tribunal, he was condemned to death, and the sentence had been duly carried out.

(The Fall of the Russian Empire, Edmund Walsh)

Some say Bloody Sunday is still going on.

One Reply to “Sunday Bloody Sunday”