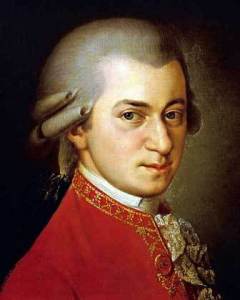 If you’re like me, everything you know about Mozart comes from Falco’s immortal ballad “Rock Me Amadeus.”

But did you know that, according to Marcel Danesi’s Forever Young: The Teen-Aging of Modern Culture:

There are solid data to suggest that even minimal exposure to the music of Mozart, for instance, benefits both children and adults in many ways.

Ironically, this maturing effect of Mozart’s music did not work on the great composer himself, who despite his musical genius, lived much of his life in a state of perpetual adolescence. Mozart’s letters are riddled with misspellings, unorthodox grammar, and references to his fecal and scatological obsessions.

“How I like Mannheim?–as well as one can like any place without Baasle [little cousin]. Pardon my poor handwriting, the pen is already old; now I have been shitting for nearly 22 years out of the same old hole and yet it’s not torn a whit!…Now I must close, as it so happens, because I am not dressed yet, and we’ll be eating soon so that afterward we can go and shit again, as it so happens. Do go on loving me as I love you, then we’ll never stop loving each other…”

Perhaps the fact that Mozart virtually “skipped” childhood [He wrote his first symphony at age 8.] led him to make up for it in later years. Granted, Mozart probably didn’t expect his personal letters to wind up on the Internet, but then who does. Anyway, his eccentricities didn’t detract from his following, either during his life or after.

Nearing the centenary of Mozart’s birth, The Musical World (1855) wrote:

There is no name in music which addresses itself more powerfully and universally than that of Mozart in appeals to the heart as well as to the intellect. From infancy his melodies are made familiar to us; they are hummed at our cradles, taught us at schools, sung at our theatres, and made the groundwork of our musical appreciation.

We’ll never know how Mozart would have aged. He died on December 5, 1791, at age 35. He died of illness, though specifically of what illness we may never know.

The mystery of Mozart’s death revolves around his haunting final work: Requiem. The Requiem was commissioned anonymously, and conveyed by a “Gray Messenger.”

Before long he became convinced that the Messenger had come to warn him of his own mortality and that he was indeed composing the work for his own death. Concerned with this morbid fascination, his wife Constanze hid the score and forbade him to work on the Requiem for several weeks.  But, shortly after resuming work in mid-November, Mozart became ill and took to his bed. He gathered a choir of friends around his bedside the afternoon of December 4th to sing the movements he had completed. He died less than twelve hours later.

His death was fictionalized in Peter Schaffer’s Amadeus. Historians believe the Requiem was not a rival composer’s plot to kill Mozart, but was commissioned by an Austrian count and amateur musician who intended to pass the work off as his own, in honor of his deceased wife.

Over 200 years after his death, historians and musicians still place Mozart in a category of his own. Mozart’s ability to connect to music-lovers for over ten generations, and his ability to express the entire range of human consciousness through music is made more remarkable considering the two things the composer never had: a true childhood, and a true adulthood. As the current Pope Benedict XVI once said:

“His music is by no means just entertainment; it contains the whole tragedy of human existence.”