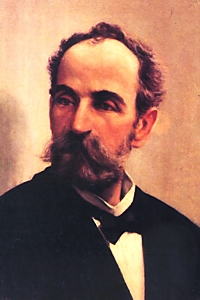 Okay, here I’m using ‘American’ in its broader sense. A Chilean once told me how he didn’t like the word ‘American’ or ‘America’ referring to one country. America stretches from the Arctic to Tierra del Fuego and encompasses two continents, he reminded me. Why let one country hijack the name? I suppose it’s because it’s shorter than saying ‘United States citizen’.

Today is the birthday of (North) American hero John A. MacDonald, the first Prime Minister of Canada and an unabashed drunkard.

But my Canadian sources tell me no one in Canada knows or cares.

So instead let’s look south to the island of Puerto Rico to celebrate the birthday in 1839 of another American hero, a man called “the Citizen of the Americas”: Eugenio Maria de Hostos.

Hostos is considered one of the great modern thinkers of education. He wrote scores of books and hundreds of essays in numerous disciplines, from the most revered discourse on Hamlet in the Spanish language, to La Peregrinación de Bayoán, his 1863 novel promoting Cuban independence. His seminal works on education preceded those of John Dewey by two decades, and…

“…Although Hostos did not conduct rigorous experimental research pertaining to the mind and its development, his encyclopaedic knowledge of philosophy, linguistics, psychology, sociology, history and other disciplines gave him a coherent conceptualization and an operational model of mind.”

Hostos was born in Mayaguez, Puerto Rico in 1839, the year Spanish poet Salas Quiroga magnanimously declared, “Puerto Rico is the corpse of a society that hasn’t been born.“

From inauspicious beginnings, Hostos went on to attend secondary training at the University of Bilbao, Spain, and law school at Central University in Madrid. There he joined the Spanish republican movement, protesting government restraints on basic freedoms, but he was disillusioned in 1869 when the creators of the new Spanish constitution dashed all hopes for an independent Puerto Rico.

Hostos then sailed to New York City, where he became a Cuban revolutionary 90 years before Che made it hip. In those days Cuban revolutionaries fought for independence from Spain rather than U.S. imperialism. Hostos believed that a free Cuba would lead to a free Puerto Rico, and a “Federated Antillean Republic”, composed of Cuba, Puerto Rico, and the Dominican Republic.

Hostos trekked across the Americas speaking on this and other various causes:

In Chile, he lobbied successfully for the education of women.

In Argentina, he helped establish a trans-Andean railroad.

In the Dominican Republic he founded the first Teacher’s College.

In Cuba, he hastened the abolition of slavery.

And wherever he traveled he espoused the basic rights of all peoples and the importance of progressive education throughout the Americas as both a means and an end.

In order for humans to be humans, that is, worthy of realizing their life goals, nature bestowed them with awareness of herself, the ability to know their own origins, their own strengths and frailties, their own transcendence and interdependence, their rights and obligations, their own freedom and responsibilities, the capability for self-improvement and for self-enobling of their ideal existence.

However, Hostos was gravely disappointed when in 1898 the United States annexed Puerto Rico and Cuba from Spain, rather than granting them independence.

Hostos died in the Dominican Republic in 1903.

Cuba won its independence from the United States 18 months before Hostos’s death. Hostos requested that his remains be transfered back to Puerto Rico only when his homeland gained its independence. Needless to say, Hostos has been resting in the Dominican Republic’s National Pantheon for a hundred years and counting.

For the centennial of his birth, the 8th International Conference of America bestowed upon Hostos the title “El Cuidadano de las Americas”: Citizen of the Americas.

Gentlemen, I don’t have to tell you who I am. I am an American. I have the honor of being a Puerto Rican and a federalist. Being a colonial, a product of the colonial despotism, and hindered by it in my feelings, thoughts and actions, I took vengeance upon it by imagining a definitive form of liberty and I conceived a confederation of ideas, given the impossibility of a political confederation. I am a federalist because I am American, because I am a colonial – because I am Puerto Rican.

Eugenio Maria de Hostos: After One Hundred Years, by Muna Lee, from A Pan-American Life (2004)