Over 40 years ago the small island of Nauru was granted its independence from Australia.

According to People and the Earth: Basic Issues in the Sustainability of Resources and the Environment, Nauru is the only nation in the world whose economy is based on bird droppings.

“Nauru survives by  the mining of the natural fertilizers that were produced over many millennia by the interaction of bird droppings (guana) with marine sediments exposed at the surface. Essentially depopulated during Japanese occupation in World War II, about 8,000 Nauruans now live on 1,100 of the 5,236 acres that are not mined to produce fertilizer for markets in Japan, New Zealand, and Australia.”

“When the resource is gone and mining ceases, currently estimated to occur in the year 2000, there will be no exportable product for Nauru except stamps and weight lifters. Even with reclamation, Nauru is unlikely to become a major tourist stop since there will be little of the island left that has not been stripped of every pound of exportable phosphate rock.”

Aware of their finite resources, Nauru’s leaders used profits to diversify their assets, including the 52-story Nauru House, Melbourne, Australia’s tallest building when it was built.

The history of Naura goes back 3,000 years, when the peoples of Polynesia and Micronesia settled the island. The 12 “tribes” of Naura remained cut off from outside society other until the end of the 18th century. In the 1830s contact with the Western shipping and traders increased, allowing islanders to trade resources for popular imports: alcohol and firearms. Both, unfortunately, exacerbated the bloodshed of the 10-year Nauru Civil War during the 1880s. The population fell from 1,400 to 900.

After Germany annexed the Island at the end of the 19th century, they discovered and began mining phosphate.

Australia captured the island in World War I and it was governed  by the UK, New Zealand, and Australia.

During World War II the Japanese captured the island, turning it into one big airstrip, while deporting 1,200 inhabitants for hard labor for the war effort. Australia retook the island in 1945.

On January 31, 1968 Nauru was granted independence.

True to predictions, the export that had sustained the island since 1907 was depleted. The nation with one of the world’s highest per capita GDPs at the time of its independence became one of the world’s poorest. Its fertile land, now destroyed by a century of mining, is uninhabitable and unable to be restored.
Naura House in Melbourne was sold for $140 million to clear the nation’s growing debts. The island encouraged offshore banking as a tax shelter, and soon became a beacon of hope for money launderers everywhere.

Nauru cracked down on money laundering due to international pressure. Today Naura exports less than $600,000 in phosphate–its only export–and imports $19 million.

And the island, once cut off from the world and self-sufficient for thousands of years, is now completely dependent on Australian aid. 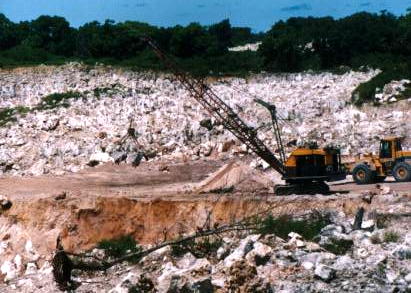 Angam means “jubilation” or “homecoming”. The jubilation doesn’t refer to any election, battle, revolution, legislation, or victory. It celebrates a birthday. It’s the birthday of a woman named Eidaruwo, who was born on October 26, 1932. But Angam Day doesn’t celebrate anything she did. In fact, it was first celebrated on the very day she was born.

For nearly all of its 3000 year history, Nauru’s remote location ensured its isolation, ever since Polynesian and Micronesian travelers first settled there. Contact with the West in the 19th century could not have come at a worse time. Not only was the country ripe for exploitation, the importation of guns and ammo exacerbated deadly tribal wars that devastated the island’s population.

The population of the island fell from 1,400 to 900 and didn’t recover. After World War I, an Australian study determined that the island’s population was so low that the race was in danger of dying out. Nauru would have to reach 1,500 in order to ensure healthy survival.

The mission to achieve 1,500 people united the island. It took many years, but on October 26, 1932 a baby girl named Eidaruwo was born. The whole island celebrated her birth, and they have celebrated the date as Angam Day ever since, except during World War II.

Today Nauru’s population is over 13,000, making it one of the most densely populated countries in the world. But during the 20th century, phosphate mining depleted the island’s natural resources.

Now the nation has a new mission: sustainability.