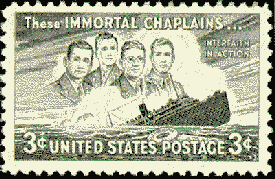 A priest, a rabbi, and two ministers set out to sea to fight the Nazis.

This is not a joke, but the beginning of a sad but inspiring story of four chaplains who are remembered today as, aptly, the Four Chaplains.

George Fox was the eldest, a 42 year-old WWI veteran who had become a Methodist Minister at age 34. He joined the Army Chaplain Service the same day his teenage son joined the Marines.

Alex Goode, a Brooklyn-born Rabbi in Pennsylvania, studied at Cincinnati and Hebrew Union College before earning a Ph.D. from Johns Hopkins. He joined the Army Chaplains in 1942, leaving behind his wife and 3 year-old daughter

Clark Poling, was born in Ohio and grew up in Massachusetts and Poughkeepsie. He studied in Michigan and at Rutgers before getting his B.D. at Yale’s Divinity School. The young Dutch Reformed Pastor told his father, a WWI Chaplain, that he didn’t want to sit the war out in the shelter of the church. His father told him that in WWI chaplains had the highest mortality rate of all. “You just can’t carry a gun to kill anyone yourself.”

The fourth chaplain was Father John Washington. As an Irish Catholic Priest, he was the only unmarried, childless chaplain of the four. He grew up in a poor immigrant family and was even in a gang as a youth, but received a calling from God, and was ordained in 1935. The bespectacled Washington joined Fox, Goode, and Poling at the Harvard Chaplain School, and the four developed a strong friendship.

In January, 1943 they boarded the U.S.A.T. Dorchester bound for Europe. With over 900 passengers, mostly soldiers and few civilians, the ship was 150 miles from Greenland when it entered the waters known as “torpedo junction”. During the voyage, the four worked together to ease the fears of the men. Priest, Minister, and Rabbi offered prayers to soldiers of all faiths, not just their own.

The evening of February 2, the Captain instructed the soldiers to wear their life vests. Most however didn’t take the warning to heart. On February 3, the Dorchester was struck by a German torpedo, killing about 100 men instantly.

When the life vests were gone, the four chaplains, without hesitation, each removed their own, and gave them out to the men, thus ensuring their own demise.

The Four Chaplains sunk with the Dorchester, along with over 600 men. Survivors recalled the last thing they saw on the ship was the four chaplains aboard the sinking ship, still encouraging the men with prayer and song…

“Our Father, which art in Heaven, Hallowed be Thy name. Thy kingdom come, Thy will be done.”

The 8,000 chaplains of the U.S. military during World War II earned 2,453 high medals. Though none could receive the Medal of Honor because of its special qualifications, a medal was created as its equal specifically for the Four Chaplains.

John Ladd, a survivor of the Dorchester, recalled the actions of the four chaplains atop the sinking ship as “the finest thing I have seen or hope to see this side of heaven.”