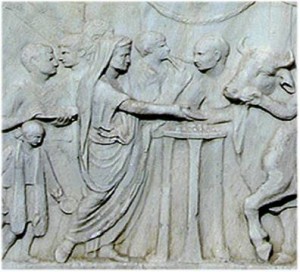 The Romans knew how to party. So much so that their toga ensemble has become the symbol of a decadent good time, especially in the “Greek” system in colleges across North America. Of course the Greeks didn’t wear togas—the Romans got it from the Etruscans—but we’ll let that slide.

Thanks to writers like Ovid and Cicero, we know that every month of the Roman calendar was flooded with festivals and sacred days for the pantheon of gods and goddesses. With one exception:

There were only two notable holidays in the seventh month. (September didn’t become the 9th month until the second century BC.)

On September 13th, Romans observed the Ides, the day honoring the Roman king of the gods, Jupiter.

But the Romans honored Jupiter every month on the Ides. The 15th of March, May, July, October, and December; the 13th of all other months.

The other September event was known as Ludi Romani, or the “Roman Games“.

Ludi Romani was one of the most anticipated and biggest events of the year, and in its heyday stretched for over two full weeks, from September 4 to September 19.

According to tradition, the first games were instituted by King Tarquinius Pricscus (Tarquin the Elder) in the 6th century BC, after a Roman military conquest. He created the Circus Maximus to hold such an event.

The Circus Maximus was constructed between two of Rome’s seven hills, Aventine Hill and Palatine Hill. At over 2,000 feet long, the Circus could seat upwards of 150,000 spectators, and more could view the Games from the surrounding hillsides.

The main event of the Games was chariot racing, or ludi circenses. These races could be far bloodier than any Ben Hur movie. Other attractions included boxing, battles with wild animals, and gladiator bouts, though these were all later moved to other venues designed for such events. (The lack of a barrier between the stands and the track didn’t protect spectators too well from wild animals.)

Originally the Games were only one day, then two: September 12th and 14th.

The Games were celebrated intermittently until 366 BC when they became “the first set of Ludi to receive annual sponsorship by the Roman state…” (The Roman Games: a Sourcebook, by Alison Futrell)

Three years later, ludi scaenici, or theater plays inspired by the Greek, premiered at the Games.

By the time of Julius Caesar the Games lasted two full weeks. After his assassination, Rome honored him…by adding another day. 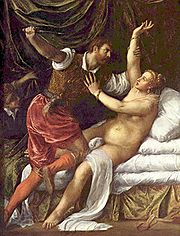 Over 2500 years ago present-day Italy was ruled by a king with a superbadass name, Tarquinius Superbus, who inherited the throne, not through direct lineage, but the even-older-fashion way–by offing his wife’s dad King Tullius.

Servius Tullius had angered the Roman elite by implementing revolutionary policies that protected the poor and laid the foundations for constitutional government. Tarquinius and the king’s daughter Tullia, outraged at how her father was flushing their country down the toilet, led the conspiracy to assassinate him, ending his 44-year reign. According to legend, Tullia showed her remorse for the murder by repeatedly running over her father’s dead body with a chariot.

Tarquinius ushered in a new age of Roman reform, by repealing his father-in-law’s Constitutional decrees and maintaining the peace through violence, murder and terrorism. These halcyon days came to an abrupt halt in 510 BC. Just as Tullius’ daughter became the king’s downfall, Tarquinius’ son Sextus would become his, taking down not only his father, but the entire concept of monarchy in his wake.

The unruly and loathsome Sextus decided it would be a thrill to rape one of the most respected and pious members of Roman patrician society. He told Lucretia, wife of the nobleman Collatinus, that if she refused to submit to him, he would have her killed and place her body in bed with a dead slave, all before her husband returned home. A fate worse than death, she would be disgraced for all time.

Lucretia gave in to the threat. But after the evil deed, she reported circumstances of the rape to her family. She then committed suicide to save them from scandal. The furor that arose against the king led to a revolt against the monarchy and the deposing of the whole king’s clan.

On these precarious beginnings grew the most famous republic in world history. A republic that only ended half a millennium later when Julius Caesar was elected dictator for life.

But that has nothing to do with Republic Day. No, the Italians celebrate Republic Day to commemorate this day back in 1946, when they elected to boot the House of Savoy, Europe’s longest ruling royal house, from power.

In 1922, after a series of riots and civil unrest, Italy’s King had appointed the strong figure of Mussolini, leader of the Fascist Party, to be the nation’s new Prime Minister. (Today’s word fascist comes from the Italian fascio, referring to a bundle of rods. In the 19th century the fascio was used by political groups as a symbol of Italian unity: the individual sticks of the fascio were fragile, while the bundle itself was unbreakable.)

The King assumed Mussolini would reign in the rebelling democratic and parliamentary institutions. Mussolini did indeed consolidate power, by declaring himself supreme dictator and doing away with any semblance of representative or Constitutional government.

In 1939 Mussolini and the Fascists brought Italy into World War II on the side of Nazi Germany in the hopes of rebuilding an empire–a mission accomplished by conquering King Zog of Albania. Mussolini met his fate near the end of the war. Executed by a Soviet firing squad, Mussolini’s body was hung upsidedown at an Esso gas station, where it became a punching bag for angry Italian citizens. 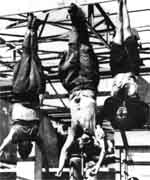 But his death didn’t ease resentment against the monarchy that had once promoted the dictator.

There were no names or specifics on the famous 1946 referendum. The ballot asked voters to determine whether the Head of the Italian State would be held by the Royal Family–the House of Savoy–or a democratically elected representative.

During this process King Vittorio Emanuele III handed over the throne to his son Umberto II. Umberto is called “the King of May”, referring to his fleeting reign. On June 2 and 3 a narrow margin of Italians voted for the final abolition of the Italian monarchy.

As a result of the referendum the king and his progeny were forced to leave Italy forever. It wasn’t until 2002 that this provision was overturned, and the son of King Umberto, Victor Emmanuel, exiled for 56 years, finally re-entered the land he once almost ruled.