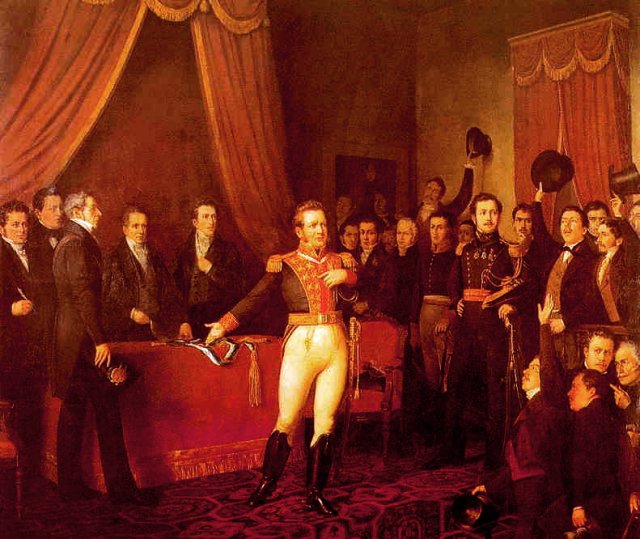 Live with honor or die with glory.

Bernardo O’Higgins is known as the liberator and national hero of Chile, but he had humble beginnings.

He was the illegitimate son of an Irish engineer and a young Chilean socialite. His father Ambrosio, had been a servant boy in Ireland. Ambrosio emigrated to Spain as a young man, then to Spain’s colonies in the Americas. He settled in Peru, studied to be an engineer, and eventually worked his way up to becoming the Spanish Viceroy of Peru, the highest office in Spain’s greatest colony.

It’s believed that Bernardo never met his father; he was raised by his mother’s family. But through correspondence Ambrosio made it possible for Bernardo to be schooled in England. Bernardo lived briefly to Spain where he met the future Argentinean liberator Jose de San Martin. When he returned to Chile, Bernardo took his father’s name, O’Higgins, and was determined to fight for an independent Chile.

As with other South and Central American colonies, Chile’s initial declaration of independence can be seen as a bizarre act of loyalty to Spanish royal family. Chile refused to recognize Napoleon’s appointment of his brother to the throne of Spain, after the French emperor had deposed the royal family in Madrid. At a public meeting on September 18, 1810, Chileans demanded that the Spanish government in Chile be replaced with a junta of Chilean citizens.

By the time Spain regained control of its homeland and expelled Napoleon’s forces from Iberia, the South American colonies had already tasted independence, and it tasted good.

Bernardo served as a soldier, an officer, and then as one of three leaders of the Chilean rebel forces. But he was defeated by the Spanish, and was forced to retreat east to Argentina. He crossed the Andes to combine forces with his old friend San Martin. After liberating Argentina, he and San Martin made the most spectacular military maneuver in South American history. The entire army crossed the Andes mountains, fell on Santiago from above, and drove out the Spanish.

San Martin took the army north to drive the Spanish out of their stronghold in Peru. O’Higgins remained in Chile to become that country’s first leader. Five years later, when political elements demanded his resignation, he stepped down without a fight, and went into voluntary exile in Peru, where he lived the rest of his life.

“Since my childhood I have loved Chile; and I have shed my blood on the battle-fields which secured her liberties. If it has not been my privilege to perfect her institutions, I have the satisfaction of knowing that I am leaving her free and independent, respected abroad, and glorious in her victories.”

The Chileans celebrate Dieceocho with a slew of Fiestas Patrias, parades, feasts, and open-air dances that go on for days. The day after Independence Day is Armed Forces Day, the main event of which is a large military parade through the capital.

Over a hundred years ago a territorial dispute over the Argentina-Chile border in the Andes nearly led to war between the two nations. The conflict was settled diplomatically. Soon after, a statue of Christ was erected between Argentina and Chile, atop the mountains O’Higgins and San Martin once scaled together. The plaque reads:

“Sooner shall these mountains crumble into dust, than Chileans and Argentines shall break the peace to which they have pledged themselves at the feet of Christ the Redeemer.”