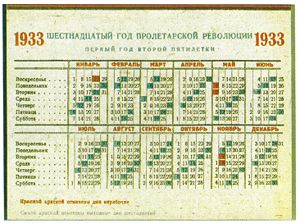 It’s January 1 in the Orthodox Calendar, observed by Orthodox Churches in Russia, Macedonia, Serbia, and many of the former Soviet Republics, including Ukraine, Armenia, Belarus, and the one that’s all consonants. (Kryrrrgyztyrgystan)

So is Russia two weeks behind the times? Do they feel the need to have the last word on New Year’s Eve parties? Or does being torn between two New Year’s dates simply give them the chance to party for two full weeks?…(which the Russian winter could definitely use.)

The story goes that up until the late tenth century, much of Russia and Byzantium celebrated the New Year during the spring equinox. That changed in 988 AD when Basil the “Bulgar-slayer” Porphyrogenitus* introduced the Byzantine Calendar to the Eastern Roman Empire.

The Byzantine Calendar was like the Julian Calendar except it began on September 1, and its “Year One” was 5509 BC—the year historians calculated as the creation of the world (Anno Mundi) according to genealogies of the Bible, from Adam to Jesus.

It took roughly four centuries for the “September 1st” New Year to make its way into the heart of Russia. And just when the Russians were getting used to that, Peter the Great switched to the Julian Calendar, moving New Year’s to January 1 in 1700 AD.

It was only a matter of 50 years until all of Protestant Europe stopped using the Julian Calendar altogether, in favor of the Catholic Europe’s Gregorian Calendar, leaving Russia and the Orthodox Church out in the cold.

So for the next two-hundred years, even though Russia celebrated New Year’s on January 1st according to their calendar, their entire calendar was about 11-13 days behind the rest of the West. (Which is why the Russian October Revolution took place in November.)

It wasn’t until 1918 that Lenin finally moved Russia to the Gregorian calendar.

But the Soviet Union couldn’t let sleeping dogs lie. During the 1930s they declared war on the number 7, dividing months into five six-day weeks. Fortunately, this decade-long practical joke on the Russian people ended in June 1940.

These days, when it comes to the Old Calendar vs. the New Calendar, the Russians have tossed aside their austere ways and say, “Why choose? Have both!”

Most New Year celebrations happen on December 31st, but the holiday season continues until January 14. It’s a day of nostalgia, called Old New Year, a more sedate version of New New Year, often spent with family and watching the 1975 classic “Irony of Fate”, the Russian “It’s a Wonderful Life.”

Today we also celebrate day 2,454,846 in the Julian Day system—the number of days that have passed since noon, Greenwich Mean Time, January 1, 4713 BC. The Julian Day system was developed by Joseph Scalizer in 1582, and is used mainly by astronomers and people with way too much time on their hands.

*Basil’s title Porphyrogenitus means “born in the purple”. The title was bestowed at birth upon children who were (1) born to a reigning Emperor and Empress of the Byzantine Empire, and (2) born in the free-standing Porphyry (purple) Chamber in the Great Palace of Constantinople. (That’s why there’s less Porphygenituses than Smiths.)

“If a man is killed in Paris, it is a murder; fifty thousand throats are cut in the East and it is a question.” –Victor Hugo

Hugo died 30 years before the Armenian Genocide of 1915, but his quote could be applied to it—just multiply by thirty.

The Armenian Genocide has been called the first genocide of the twentieth century.

In November 1914, the Ottoman Empire entered World War I, and immediately met crushing defeats against the Russians to the north. Blaming the losses on Armenian traitors, the government conscripted mass numbers of Armenian men, removed them of their weapons, and forced them into labor camps.

The reason April 24 is chosen to memorialize the dead, is because on April 24 over 200 of the most prominent Armenian leaders and intellectuals were rounded up and arrested. Up until then Armenian arrests and executions had not been widely reported.

The following month the government announced the Temporary Deportation Law which allowed for the temporary relocation of anyone deemed a threat to national security. In September the Temporary Law of Expropriation and Confiscation expanded their authority: land, livestock, homes, and belongings of Armenians was to become government property.

The Armenians were taken to deserts, concentration camps, and other remote locations by the hundreds of thousands. Men, women, and children were either left to starve or executed.

The Turkish government today disputes the numbers of those killed, and the extent of government involvement, claiming for example, that many of the deaths were the result of poor farming weather that coincided with the relocation.

News of the atrocities were reported in the West at the time, and even the Ottoman’s allies during WWI, Germany and the Austro-Hungarian Empire, expressed concern over the mass deportations and executions of the Ottoman Empire’s Christians.

Years later a German statesman would ask, “Who after all, speaks today of the annihilation of the Armenians?”

But he didn’t say it out of pity. It was Adolf Hitler, speaking to his generals, using it as a justification for the future invasion of Poland and the Jewish Holocaust.

Nothing Personal / Among the Deniers