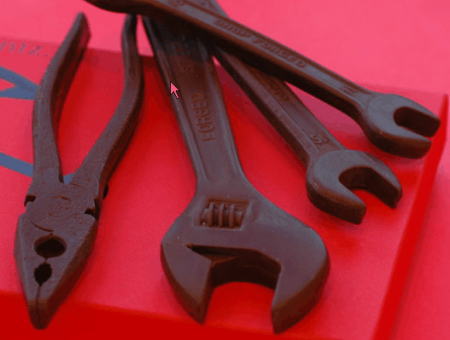 “For 15 years, Sadie Hawkins, homely daughter of Dogpatch’s earliest settler, had failed to catch a husband. Her Pappy in desperation one day called together all the eligible bachelors of Dogpatch…”

With the boom of Pappy Hawkins’ gun, artist and writer Al Capp started a sexual revolution.

The year was 1937. Al Capp, creator of the comic strip Li’l Abner, needed a plot point to move the story along in his November strip. Li’l Abner starred Abner Yokum, a small-town simpleton whose life revolved around fishin’ and not gettin’ hooked to his long-suffering girlfriend Daisy Mae. The Sadie Hawkins Day tradition fell into place. Al Capp invented a race wherein, if a woman could catch a man, she could wed him. Capp explained the reasoning behind the race in a three-panel historical flashback of the original Sadie Hawkins.

“Well, Sadie did catch one of the boys. The other spinsters of Dogpatch reckoned it were such a good idea that Sadie Hawkins Day was made an annual affair.”

Al Capp’s idea struck a cord, not just with the fictional residents of Dogpatch, but all around America. Keep in mind Al Capp came up with this back when it was frowned upon for a woman to even ask a guy out on a date or to a dance. Yet within two years of Sadie Hawkins’ original appearance, “Sadie Hawkins Day” was being celebrated at over 200 schools in 188 towns across the United States! (Life Magazine, Dec. 11, 1939.) Granted, at most of these institutions the girls didn’t marry the guys they caught. Instead, the schools held Sadie Hawkins Dances, in which girls would ask boys to the dance instead of the typical other way around.

“Costumes derive from characters in Li’l Abner. Girls generally dress as pretty Daisy Mae rather than as homely Sadie Hawkins. At Texas Wesleyan, where Bible study is a required course, a slogan for Sadie Hawkins Day was found in Daniel, XII, 4: “Many shall run to and fro, and knowledge shall be increased.” (Life Magazine, 12/11/39)

As it turns out, Daisy did not catch Abner that first Sadie Hawkins Day in 1937. In fact, it wasn’t until 1952 that Al Capp bowed to public pressure and allowed Daisy and Abner to tie the knot, an event that made the cover of Life Magazine. 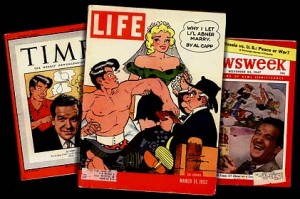 Incidentally, Capp himself would not have fared well in any Sadie Hawkins Day race. As a nine-year old boy in New Haven, the future comic writer was run over by a trolley and lost his left leg.

“…We didn’t laugh because we were heartless wretches. We laughed because we are normal human beings, full of self-doubt, full of vague feelings of inferiority, full of a desperate need to be reassured.” Al Capp, Atlantic Monthly, February 1950

“It is the ambition of every newspaper cartoonist to get published in something that won’t be used to wrap fish in the next morning.” Al Capp, Atlantic Monthly

My Well-Balanced Life on a Wooden Leg, by Al Capp, Review by Bobby Matherne 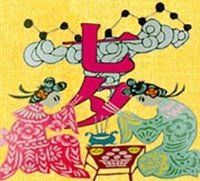 “Russia’s First Lady, Svetlana Medvedeva, is chairing a comittee to celebrate July 8th as a Russian “anti-Valentine’s Day”, with emphasis on family, mariage and long-term faithfulness, rather than what she (and many in Russia) considers the shallowness of Saint-Valentine’s celebration of short-term infatuation.

“If this year’s first July 8 celebration of SS. Piotr and Fevronia (two 13th century Russian Orthodox Saints who were married and buried in the same coffin) is a success, Mrs. Medvedev has promised to make it an official public holiday in Russia.”