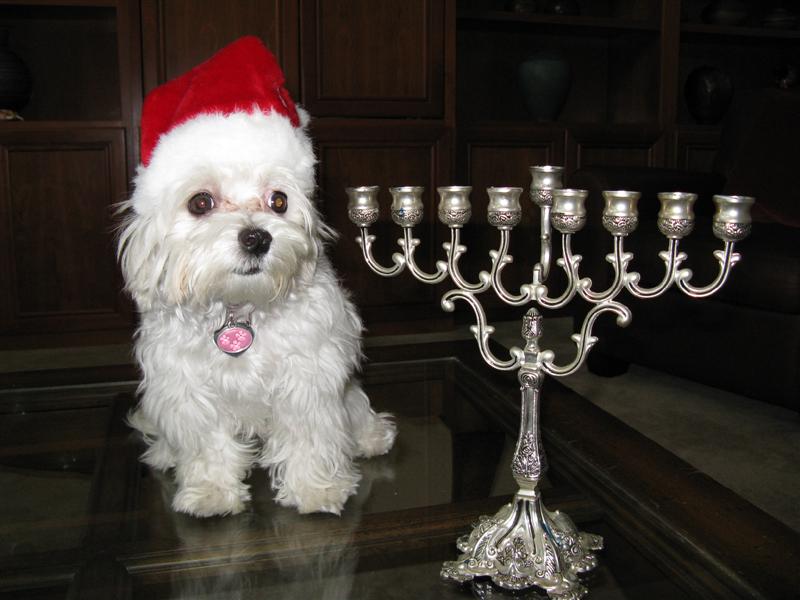 Today is Love Your Pet Day!

This day was created by humans to celebrate the domesticated non-human animals with whom they live.

You can view the strange things humans do with these animals at: 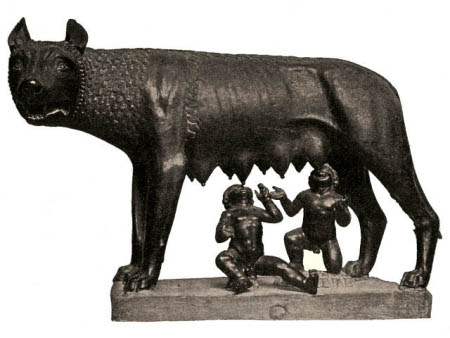 On this day the ancient Romans remembered the She-wolf who suckled the baby Romulus—the future founder of Rome–and his brother Remus.

The priests of Rome, known as the Luperci, or ”Brotherhood of the Wolf,’ would commemorate this day by running around in loincloths smacking women on the back with an animal-skins.

What is immediately apparent in a comparison between the sacred rites of then and now is that then it was much more fun being a priest.

The ritual was intended to promote fertility, and the part about whipping girls legs is still practiced on Easter Monday in parts of Eastern Europe.

Over time this festival of the Romans was superseded by the Purification of the Virgin and the Festival of Saint Valentine. 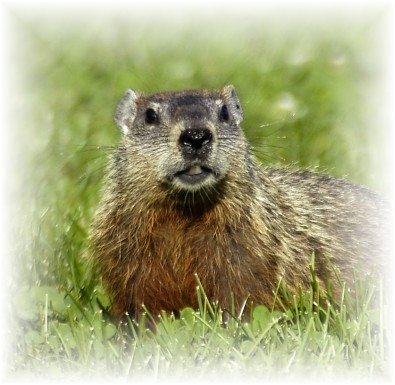 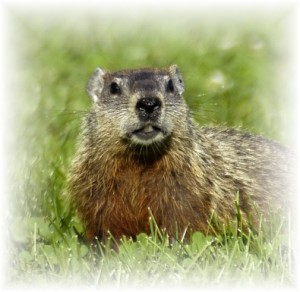 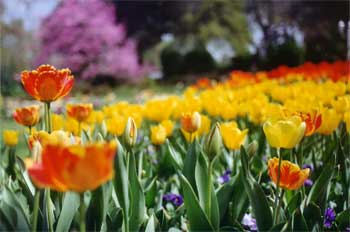 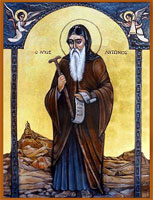 Before there was Doctor Dolittle, there was St. Anthony Abad, patron saint of the animal kingdom.

St. Anthony the Hermit, or St. Anthony the Great, was born in Egypt in 251 AD and lived to be 105. At age 34, he relinquished all his wealth and headed into the desert to be alone with God and meditate on Christ. He spent twenty years in isolation living in an abandoned Roman fort on a mountain by the Nile. The devil tormented him with images of animals attacking him, but Anthony never gave in.

Later in life, according to legend, various animals helped guide Anthony on his travels, including a wolf and a raven.  Once a dog attacked his enemy. Once he cured a pig from illness. He’s often pictured wandering the wilderness with a pig by his side.

Anthony’s other claim to fame was his fight against the followers of Arian Christianity in the late 3rd and early 4th centuries. Arias was an Egyptian Christian who taught that, while Jesus was divine, he was not the same as God. The Council of Nicea declared Arian Christianity heretical in 325 AD.

Blessings of pets and livestock are common, but not limited to Latin and Hispanic cultures. The biggest ceremonies occur on the Sundays nearest the feast days of St. Francis of Assisi (October 4) and St. Anthony the Hermit (January 17).

St. Anthony died on January 17, celebrated as his spiritual birth in Heaven.

Even now I remember being caught up in the moment, feeling inexplicably happy when my doggie received her very own blessing from the priest. When all is said and done, it was a remarkable experience, a chance to share our love for our beloved pets, and to renew our commitment to protecting and respecting all of God’s creatures.

Rose Lee Hayden, Goin’ to the Chapel, The Blessing of the Animals a la Romana 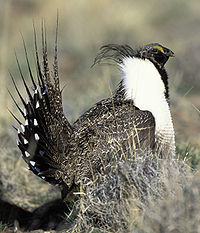 The Game Act of 1773 established what has come to be known as “the Glorious 12th” in England. Not to be confused with Northern Ireland’s Glorious Twelfth in July, August’s Glorious 12th is the first day of hunting season of red grouse in England. Apparently this is a big deal. 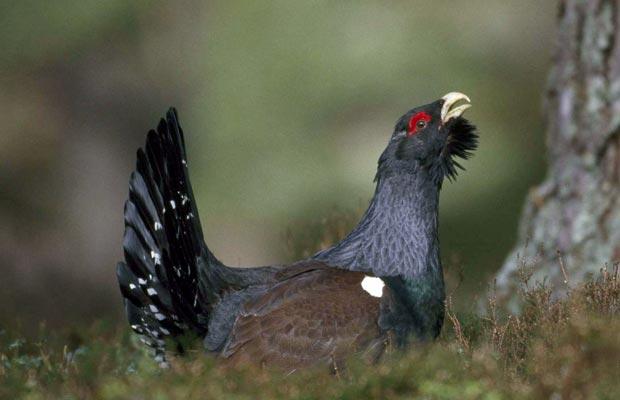 The foregoing observations relative to partridges may be nearly as well applied to grouse shooting, when we recollect that Lord Strathmore’s keeper, in killing forty-three brace of muir-game before two o’clock in the afternoon, had only bagged three birds at eight in the morning…The chief difficulty to be guarded against in this delightful sport, is the maneuvre of the old cock, who is cackling forward, in order to lead you away from the brood.

Instructions to Young Sportsmen in All that Relates to Guns and Shooting – by Peter Hawker, 1844 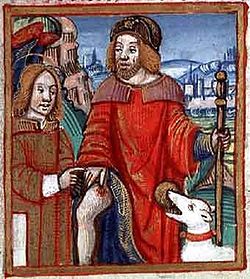 August 4 is also the birthday of U.S. President Barack Obama. We know when he was born, but where exactly where he was born is at present a topic of heated debate, dominating the media coverage on conservative talk shows. It may be that one day a child will review the historical archives of August 2009 and be surprised that the question of Obama’s citizenship even existed, let alone monopolized the news cycle, between the death of Michael Jackson and the devastation of Hurricane Grace. But until that day, we wish the President good luck in his quest to prove he’s American, and we ask Sithney to hasten his healing efforts on certain unnamed talk show hosts. 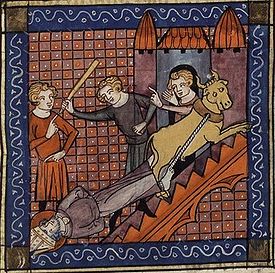 14 people have been killed in the San Fermin Running of the Bulls since 1924, when they began counting. To give you an idea of the scope of the mayhem, that’s almost equal to the number of people killed by vending machines in the U.S. since 2001.

Running with the Bulls (aka the Encierro) has been a Pamplona tradition for centuries. Local organizers remind tourists to take safety precautions and warn them of the potential for serious injury. The warnings are often shrugged off, but last year two California brothers got the point in the end. 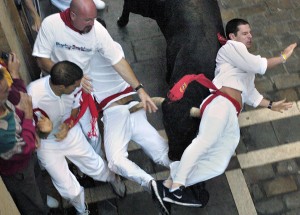 Protesters aren’t so concerned with injuries to humans, but with cruelty to animals. 40,000 bulls are killed by the bullfighting industry each year in Europe. These and other facts about bullfighting are ‘exposed’ during PETA’s Running of the Nudes, which coincides with the festival each year.

Who knows which Run the good Saint Fermin would prefer? 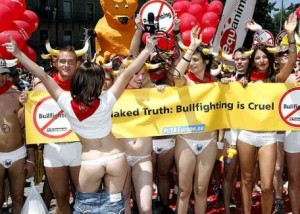 Q: So who is this Saint Fermin anyway, and what does he have to do with bulls?

A: St. Fermin was the son of a Roman senator in Pamplona. He converted to Christianity, was named a Bishop in Amiens, returned to Pamplona to lead his flock, and was martyred back in Amiens in 303 AD. He was actually beheaded, not slaughtered by bulls. And in September, not July.

It was his predecessor Bishop Saturninus of Toulouse who had the honor of being tied to a bull by his legs and dragged to his death. The two saints’ martyrdoms are sometimes confused because of Fermin’s association with the Encierro.

The tradition of honoring St. Fermin in Pamplona dates back to 1186, though the liturgical festival was originally in October. It was moved to July 7 in 1591 to coincide with the summer market fairs and bull ceremonies.

So if you’re running with the bulls this week, stretch beforehand, wear good shoes, and be careful where you slip.

[Also on July 7: the Japanese celebrate Tanabata, the reunion of the lovers Orihime and Hikoboshi—stars in the heavens who are permitted to visit each other one day of the year—the seventh day of the seventh month. People create beautiful origami in their honor and write wishes on tanzuku to send up to the two briefly reunited lovers.] 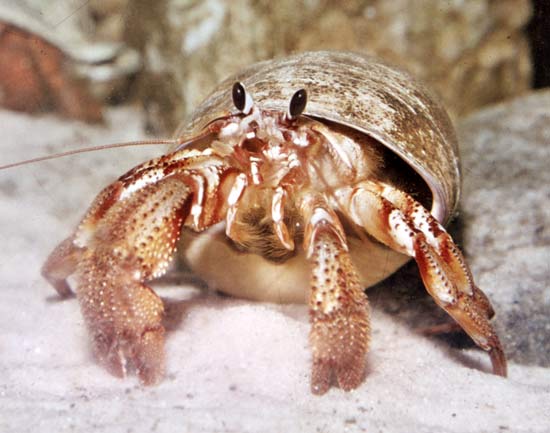 1st Thursday in May

If a hermit crab in Ocean City, New Jersey, sees its shadow today, summer will come one week early. 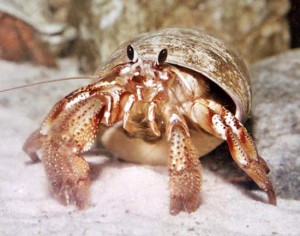