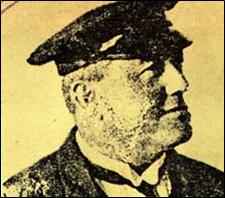 Sounds like the name of a Batman character, and its eccentric, British, paralyzed bearer could have easily been one.

Little is known of Henry Edward Ernest Victor Bliss’s early life. He was born in Buckinghamshire, England in 1869 and became an engineer. He received the title “Fourth Baron Bliss of the Kingdom of Portugal” in adulthood, probably through his relation to war veteran Sir John Moore, though some historians dispute this.

He had hoped to retire early and sail the world, but he was paralyzed from the waist down at the age of 42. Still determined, he used a yacht, the Sea King, to travel around the British Isles. The Sea King was commandeered during World War I.

After the war Bliss built a new yacht, the Sea King II. He left a good amount of his fortune with his wife Ethel (They had no children) and pursued his lifelong dream. He spent five years in the Bahamas, fishing. Then moved on to Trinidad, where the unfortunate Bliss experienced a very bad case of food poisoning.

After recovering slightly, the ship sailed for the shore of British Honduras—what is now Belize. Bliss spent several weeks off the coast of the small Crown Colony just southeast of Mexico. Bliss fell in love with the area. He remained onboard his ship, but was often visited by the locals.

It is no secret why Bliss fell in love with the coast of what would one day become known as Belize. To this day Belize is considered by many to be one of the most beautiful stretches on shoreline on earth. For scuba divers, Belize is second only to the Great Barrier Reef.

Baron Bliss continued fishing there until his health took a turn for the worse. When his doctors informed him he had only a short while to live, he rewrote his will, leaving the bulk of his massive fortune to the small colony.

Bliss passed away on March 9, 1926. He requested he be buried underneath a lighthouse. The grateful Belize government used part of the inheritance to build the famous 50-foot Baron Bliss Lighthouse, as well as the Bliss Institute, the Bliss School of Nursing, and several other projects that strengthened the colony’s infrastructure. Also, the country holds a yearly regatta in his honor, as requested in his will.

Today Baron Bliss Day is still immortalized with a holiday in Belize—a country in which he never set foot.

The Lighthouse and Legacy of Baron Bliss