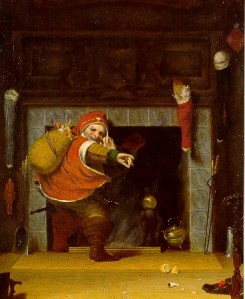 About this time of year parents deliberately wait in long lines in overcrowded shopping malls so their kids can sit on the lap of a fat red stranger.

Some cultures might call this odd. We call it Christmas.

Though the Christmas season begins commercially on Black Friday, and religiously on Advent, tonight kicks off the season for children in Europe, including the Netherlands, Germany, Belgium, the Czech Republic, and Austria.

It’s St. Nicholas’ Eve, and though the date and the figure go by many names, the themes remain the same: kids and candy.

The jolly bearded guy known as Santa Claus in the United States is actually is an amalgamation of numerous folk figures.

The United States imported “Santa Claus” mainly from the Dutch Sinterklaas. Long before that, the Dutch learned of the saint, Saint Nicholas, from Spanish sailors, who believed Saint Nicholas had the power to save sailors by stemming storms at sea. Even today Sinterklaas arrives in Holland on or around November 17 each year, not on a sleigh from the North Pole, but on a ship from Spain.

No one would be more surprised at the role Santa plays in modern society than Saint Nicholas himself, who was actually a bishop in the ancient town of Myra, Turkey (then Asia Minor) around 300 AD.

Saint Nicholas was imprisoned for 5 years for refusing to recognize the Roman Emperor Diocletian as a god. He was released after the Christian Emperor Constantine took the throne and removed Christianity from the Roman “terrorist watchlist.”

Today Saint Nicholas is remembered less for his role in destroying pagan temples than for his acts of kindness toward children. Like secretly giving poor families of young girls money for a dowry, so they could marry rather than become prostitutes.

Legends of Saint Nicholas’s devotion to the poor spread throughout the centuries. As his posthumous fame grew, children would leave their boots outside on St. Nicholas Eve in the hopes that St. Nick would fill them with goodies.

In Protestant Germany, Martin Luther replaced the Catholic gift-giving Saint Nicholas with the Christkindl, or “Christ Child.” Over time Christkindl’s name morphed to Krist Kindel. You may know him however as Kris Kringle.

In North America Santa Claus travels by reindeer-guided sleigh, while in Europe the gift-giver is accompanied by figures such as Zwarte Piet (Black Piet) or Krampus (The Claw), the latter being a goat-headed demonish entity who whips bad children with a switch. The Bad Cop to Santa’s Good Cop.

Whether you call him Santa, Kris Kindl, or Father Christmas, you better watch out, you better not cry, you better not pout, I’m telling you why: Christmas is still 20 days out and believe me, you don’t want to end up on Krampus’s naughty list!

There Really is a Santa Claus – William Federer

Saint Nicholas Customs Around the World