In the 1890s, Italy, once the seat of an Empire that stretched through three continents, held only two small colonies on the Horn of Africa, which it had won with aid from Ethiopia.

Apparently the amity treaty between Ethiopia and Italy, signed by Menelik II of Ethiopia in 1889, contained a discrepancy in the Amharic and Italian translations, the latter of which established Ethiopia as an Italian protectorate.

Menelik denounced the treaty, prompting Italy to invade. Menelik had built up an arsenal of weapons from Britain and France, and even Italy over the previous years. Menelik appealed to France for support, but France refused to negate Italy’s territorial claims.

It was at the Battle of Adwa on March 1, 1896 that Menelik’s forces of approximately 100,000 met with a surprisingly outnumbered Italian army of 17,000 under Oreste Barratieri. Barratieri had completely underestimated the opposing army’s numbers as well as their armed capabilities. Due to this and tactical mistakes on part of Barratieri, Menelik’s army completely obliterated the Italian forces in one of the most stunning defeats of any European power in Africa. After news of the humiliating battle hit Rome, the Prime Minister was forced to resign, and Italy forsook further territorial ambitions for 4o years.

Ethiopia would not be successfully invaded until 1936 when Benito Mussolini, anxious to prove Italy a superpower to its European neighbors, set his sights on Africa’s yet unconquered nation. Mussolini had seen the League of Nations’ impotence at handling border clashes between Italian Somalia and Ethiopia, and European powers were vying for Italian support against Adolf Hitler and Germany. This time the Italian army was much better equipped and had no qualms in using chemical weapons.

The League of Nations Geneva Protocol (signed by Italy) banned the use of mustard gas, but “on 10 October 1935, Rodolfo Graziani first ordered his troops to employ chemical weapons against Ras Nasibu’s troops at Gorrahei.” Italy continued to do so throughout the Italian-Ethiopian war. British and Ethiopian troops forced Italy out of Ethiopia in 1941. Two years later “London created the United Nations War Crimes Commission, but excluded Ethiopia for fear it would initiate proceedings against Pietro Badoglio,” who, as Italy’s new Prime Minister, had become a valuable asset to the Allies when Italy switched sides.

The Battle of Adwa remains to this day a symbol of African resistance against colonialism.

The Battle of Adowa: www.rastaites.com/Ethiopia/adowa.html

If you’ve just had an epiphany, you’re not alone.

In parts of Europe and the Americas Epiphany is also known as Three Kings Day, (though no number or rank is specified in the Bible) and celebrates the visit of the Magi who bestow gifts on the baby Jesus.

In the Eastern and Oriental Orthodox Churches however, the day commemorates Jesus’s baptism by St. John in the River Jordan.

As Jesus was coming up out of the water, he saw heaven being torn open and the Spirit descending on him like a dove. 11And a voice came from heaven: “You are my Son, whom I love; with you I am well pleased.” — Mark 1:10

Traditionally Christians celebrate the event twelve to fourteen days after Christmas. (Once Epiphany was the twelfth day of Christmas.) In the Ethiopian Calendar Christmas falls on December 28, or January 7 Gregorian.

Timkat/Epiphany falls on January 11th in the Ethiopian Calendar, or January 19th Gregorian.

The night before, priests take the Tabot (which symbolizes the Ark of the Covenant) containing the Ten Commandments from each Church. Concealed by an ornamental cloth, it is taken to a tent, close to a consecrated pool or stream, accompanied by much ringing of bells, blowing of trumpets and the burning of incense. — http://www.selamta.net/Festivals.htm

In Timket, Tella and Tej are brewed, special bread is baked called “Himbash” (in Tigrigna) “Ambasha” (in Amharic), and sheep are slaughtered to mark the three-day celebration. — www.ethiopiantreasures.toucansurf.com

While most African churches south of Egypt date only to the colonial era, Hebraic traditions and Semitic language were practiced by some Ethiopian tribes before the birth of Christ.

In fact, the Ethiopian Cathedral of Our Lady Mary of Zion, claims to hold the original Ark of the Covenant, said to have been brought to Ethiopia by Minelik, son of Solomon and the Queen of Sheba, around the 9th century B.C.

The Ark’s authenticity has been impossible to verify, as only one person has access to the Ark at a time: a sacred guardian, chosen for a lifetime term by the previous guardian.

The Ethiopian Orthodox Church has the most extended Biblical Canon of any major church, numbering 81 sacred books. Among those writings not included by Jewish, Protestant, and Catholic churches are the books of Enoch, Esdras, and Jubilee.

September 11th (or 12th) is New Year’s Day in Ethiopia, following the Coptic calendar and observed in the Rastafarian tradition. It marks the end of the rainy season in Ethiopia.

2000 years ago, the Ethiopian calendar fell on the equivalent of August 8 or 9. However, because of disparities between different calendars, the day now falls in September.

“The name Enkutatash was given when the famous Queen of Sheba returned from her expensive jaunt to visit King Salomon in Jerusalem. Her chiefs welcomed her back by replenishing her treasury with “Fuku,” or jewels.”

2009’s celebration marks the year 2002 AM in the Ethiopian Calendar. The festival is also the saint day of John the Baptist.

Enkutatash is celebrated with bonfires on New Year’s Eve, dancing, singing and prayers. On September 11, 2001, Ethiopians in the homeland and around the world were celebrating Enkutatash when planes flew into the World Trade Center.

“People who passed by and did not know what we were here for thought we were celebrating the attack, but we would never do anything like that,” said Ras Delbert Christie of the Montego Bay Ethiopian World Federation. (“Rastafarians Celebrate Ethiopian New Year in Jamaica”, World Wide Religious News, 2002)

Two weeks after Enkutatash, Ethiopians celebrate the finding of the true cross, or Meskel. 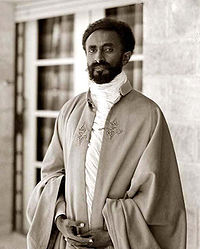 Today Rastas around the world praise His Imperial Majesty Haile Selassie I — who was born this day in 1892, and who led Ethiopia through most of the 20th Century, until his death in 1975.

“Haile Selassie” means “Power of the Trinity”. He was born Tafari Makonnen, the son of an Ethiopian governor and former general, who led troops to victory at the Battle of Adowa in the 1899 Italo-Ethiopian War. After the deaths of his father and brother, the teenage Makonnen became governor in 1911. Then Regent of Ethiopia in 1916, and Emperor in 1930.

In the Rastafarian movement, Haile Selassie is considered to have been a living incarnation of God. His many titles, such as Lion of Judah and “Jah” (from the Hebrew Yahweh), refer to this.

That until the philosophy which holds one race superior and another inferior is finally and permanently discredited and abandoned; That until there are no longer first-class and second class citizens of any nation; That until the color of a man’s skin is of no more significance than the color of his eyes; That until the basic human rights are equally guaranteed to all without regard to race; That until that day, the dream of lasting peace and world citizenship and the rule of international morality will remain but a fleeting illusion, to be pursued but never attained;

And until the ignoble and unhappy regimes that hold our brothers in Angola, in Mozambique and in South Africa in subhuman bondage have been toppled and destroyed; Until bigotry and prejudice and malicious and inhuman self-interest have been replaced by understanding and tolerance and good-will; Until all Africans stand and speak as free beings, equal in the eyes of all men, as they are in the eyes of Heaven; Until that day, the African continent will not know peace. We Africans will fight, if necessary, and we know that we shall win, as we are confident in the victory of good over evil.

In that speech Haile Selassie also alluded to an address he delivered 27 years earlier to the UN’s forerunner, the defunct League of Nations. It would be remembered as the most moving and prophetic speech in that bodies’ history.

In 1935 Fascist dictator Benito Mussolini was determined to conquer Ethiopia to resurrect the glory of the former Roman Empire. Just as Selassie’s father fought against Italy in 1899, Selassie himself now found himself facing a first-world power with far greater resources, manpower, and technology.

“I, Haile Selassie I, Emperor of Ethiopia, am here today to claim that justice which is due to my people, and the assistance promised to it eight months ago, when fifty nations asserted that aggression had been committed in violation of international treaties.

“There is no precedent for a Head of State himself speaking in this assembly. But..there has never before been an example of any Government proceeding to the systematic extermination of a nation by barbarous means, in violation of the most solemn promises made by the nations of the earth that there should not be used against innocent human beings the terrible poison of harmful gases.”

After describing the heinous mustard gas attacks on his people–poisons that had been banned by the League of Nations, the Emperor appealed to the nations that had guaranteed Ethiopia its security…

“In October 1935, the 52 nations who are listening to me today gave me an assurance that the aggressor would not triumph, that the resources of the Covenant would be employed in order to ensure the reign of right and the failure of violence.

“I ask the fifty-two nations not to forget today the policy upon which they embarked eight months ago, and on faith of which I directed the resistance of my people against the aggressor whom they had denounced to the world. Despite the inferiority of my weapons, the complete lack of aircraft, artillery, munitions, hospital services, my confidence in the League was absolute. I thought it to be impossible that fifty-two nations, including the most powerful in the world, should be successfully opposed by a single aggressor. Counting on the faith due to treaties, I had made no preparation for war, and that is the case with certain small countries in Europe.

“…It is not merely a question of the settlement of Italian aggression. It is collective security: it is the very existence of the League of Nations…God and history will remember your judgment.”

His predictions were spot on. Mussolini’s actions–and the League of Nations’ impotence–inspired Adolf Hitler to expand his own German empire. And the League continued to appease the dictators at the expense of the smaller countries of Europe until a full-scale world war was unavoidable.

Haile Selassie’s 1936 speech to the League of Nations

Haile Selassie’s 1963 speech to the UN