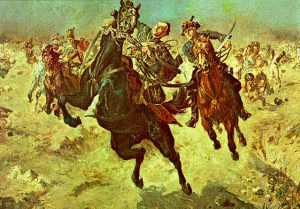 What do kids know nowadays, of bravery and sacrifice and sausages?

They think “Casimir Pulaski Day” is a Sufjan Stevens song.

Which it is. But the song from Stevens’ “Illinois” album is named for a holiday and a figure largely unknown to the vast majority of Americans outside Illinois and its neighbors.

Count Pulaski was a Polish noble, born near Warsaw on March 4, 1746 (some sources say 1745 or 1747), who became an unlikely hero of the American Revolution.

In his early twenties, Pulaski fought alongside his father in Poland against Russian forces seeking to increase their power over Poland. Pulaski quickly became a respected and capable military commander. But the Russians eventually overpowered him and his Polish forces.

[Poland was completely devoured by Prussia, Russia, and Austria in the partitions of the 1770’s and 1790’s. And other than a brief interval between WWI and WWII, Poland would remain under foreign influence until 1989.]

Having been declared an enemy of the state, Pulaski escaped to Turkey in 1772 and then to France in 1775. He was destined to help free, not his homeland of Poland, but an entirely different continent.

In France, Pulaski became acquainted with Benjamin Franklin and the Marquis de La Fayette, the French general who would lead American troops to victory during the Revolutionary War.

Pulaski decided to sail to America to join the American Colonists in their fight for independence from Britain. Serving directly under George Washington, Pulaski’s skill as a master of fighting on horseback earned him the top position in the newly-formed U.S. Cavalry, at Washington’s insistence.

On October 9, 1779, Brigadier General Pulaski took part in the French-American siege on British-occupied Savannah. Pulaski was mortally wounded in the groin during the siege and died two days later.

In the late 1920’s, Congressman Hickey of Indiana proposed holiday recognition for Pulaski, based on the sesquicentennial (150th anniversary) of Pulaski’s October 11th death.

President Franklin Roosevelt however vetoed a 1935 bill which would have made each October 11 “Pulaski Memorial Day,” stating:

“Every American should have the deepest appreciation of the brilliant and gallant services of General Pulaski in the Revolutionary War… [but] I do not think that General Pulaski would have wished to be singled out from his fellows and comrades for more honor than we can give to them all.”

quoted in “Politics and People” by James Harold Wallis

The Fifth Avenue Pulaski Parade in New York City dates back to 1937 and falls on the first Sunday of October. The Parade celebrates not just Pulaski but all things Polish.

In 1977 the Illinois Legislature decided to celebrate his birth rather than memorialize his death, declaring the first Monday in March Casimir Pulaski Day. School kids and many government workers get the day off in Chicago, the city with the largest Polish population outside of Poland.

Wisconsin holds a public school observance day in his honor, on or near what is believed to be the actual date of his birth, March 4.

[Pulaski Day was Monday—it’s celebrated the 1st Monday in March in Illinois—but I’ve moved this post to March 4 because that’s  Pulaski’s actual birthdate. March 4 was also the day Chicago was incorporated as a city. And in the Catholic Church, March 4 is St. Casimir Day, patron saint of Lithuania. No, it’s not named four our man Pulaski, but for the 15th century saint who died of tuberculosis.]