In the house of Vasudeva will the Supreme Lord, the original transcendental person, personally appear…

After midnight, we’re gonna let it all hang down.

Though worshipped differently across many Hindu sects, Krishna is one of the holiest figures–if not the holiest–in the Hindu religion. He was born at midnight on this, the eighth day after the full moon of Bhadrapada/Shravan, in the year–well, before you were born.

In 2010 Sri Krishna Jayanti, or Krishna Janmashtami, falls on September 1 or 2, depending on location.

Krishna is considered the eighth and greatest incarnation of the god Vishnu. In art, he’s commonly pictured as a baby or as a youngster playing the flute. Krishna means “black”, but he’s more often depicted as blue. 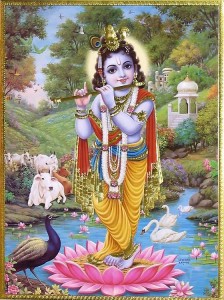 Before Krishna was born, a prophecy was told to the King Kamsa. That he–the king–would be killed by his cousin’s son. Kamsa placed his cousin Devaki and her husband Vasudeva in prison. Every son that Devaki bore, Kamsa had killed. Six children in all. The seventh boy, Balarama, was magically transfered to the womb of another woman. The eighth child Vasudeva managed to sneak out of the prison. The boy was Krishna. Vasudeva encountered a cow-herding couple who had just given birth to a daughter. They switched babies and Vasudeva returned to the prison, showing Kamsa that the child was a girl, not a boy.

Krishna grew up with the humble cow-herding family. He was a mischievous kid, known for playing pranks and for seducing women with the romantic music of his flute.

When the King heard of Krishna’s existence he invited Krishna to a wrestling match, set up to trap and kill Krishna and his elder brother Balarama. The brothers foiled King Kamsa’s plans, defeating first a mighty demon elephant and the King’s best wrestlers.

When the King drew his sword, Krishna grabbed him by the hair and crushed him to death, fulfilling the prophecy.

The holiday comes to a climax at midnight tonight, when Krishna was said to have been born. Krishna is worshipped through the chanting of Vedic hymns, and mantapam structures built in his honor are decorated with thindis snacks and fruits…

After midnight, it’s all gonna be peaches and cream. 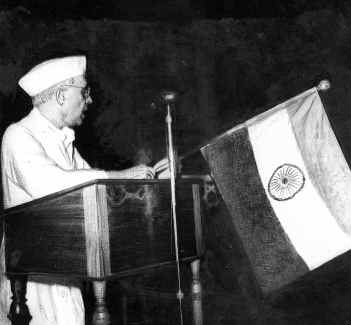 The Twentieth Century witnessed over 140 countries gain independence. [35 of them in the years 1960 and 1991 alone]. But few, if any, stirred such emotion, involved so much conflict, changed and disrupted so many lives, inspired so many future leaders, and so fundamentally altered the world we live in, both politically and philosophically, as the independence of India.

A hundred-year struggle against imperialism and colonization came to a climax as Prime Minister Jawaharlal Nehru addressed his people on the eve of India’s long-awaited independence:

Long years ago we made a tryst with destiny, and now the time comes when we shall redeem our pledge, not wholly or in full measure, but very substantially. At the stroke of the midnight hour, when the world sleeps, India will awake to life and freedom. A moment comes, which comes but rarely in history, when we step out from the old to the new, when an age ends, and when the soul of a nation, long surpressed, finds utterance.

India found that, like so many other countries, while freedom and self-determination solved some ills, other problems were exacerbated. The partition of India into two separate, independent nations disrupted millions of lives and led to a bloody conflict that has not healed to this day.

Less than six months after independence, the Pakistani-Indian conflict would take the life of Mohandas Gandhi himself, the Indian former-lawyer who used civil disobedience to combat racial injustice in South Africa and who raised peaceful resistance to a new level to free his own countrymen in India. On January 30, 1948, Gandhi was shot by a Hindu radical, who was angry at Gandhi’s cooperation with Muslim Indians and Pakistanis.

Despite the death of its greatest leader, the story of Indian independence showed the world that the principles Gandhi preached, concepts of non-violence and the power of peace, were not mere religious dogma, not words spouted by the powerful to keep the powerless meek and compliant, but were weapons capable of ending an Empire.

Swami Vivekananda was once asked by an Englishwoman, “What have you Hindus done? You have never even conquered a single nation.” To which the Swami replied…

That is true from the point of view of the Englishman…but from ours it is quite the opposite. If I ask myself what has been the cause of India’s greatness, I answer, because we have never conquered.