Born on July 4, 1776, America is—zodialogically speaking—a cancer. And had our forefathers been more astrologically attuned, our national symbol might have been the New England crab. Fortunately we settled on an eagle (though the turkey was a serious contender).

As everyone knows, the members of the Continental Congress in Philadelphia declared the 13 colonies of North America to be free and independent states in 1776, on that historic date, July 2nd.

That’s right, two days ago. You’re late for the party. You should have barbecued those hot dogs Friday. So what the heck were the forefathers doing between July 2 and July 4?

“Yesterday the greatest Question was decided, which ever was debated in America, and a greater perhaps, never was or will be decided among Men. A Resolution was passed without one dissenting Colony ‘that these united Colonies, are, and of right ought to be free and independent States… (Letters of Members of the Continental Congress)

…The Second Day of July 1776, will be the most memorable Epocha, in the History of America. I am apt to believe that it will be celebrated, by succeeding Generations, as the great anniversary Festival…It ought to be solemnized with Pomp and Parade, with Shews, Games, Sports, Guns, Bells, Bonfires and Illuminations from one End of this Continent to the other from this time forward forever more.” (American Historical Review)

Adams was two days off. The event that spawned his great anniversary Festival was yet to come.

On July 3 and 4 the Congress debated the language of the formal document declaring the reasons for the break, to be sent to England. They agreed on the final draft on July 4th, the date inscribed at the top.

The task of penning the document had fallen to a young Virginian named Thomas Jefferson. According to Adams…

Mr. Jefferson had been now about a Year a Member of Congress, but had attended his Duty in the House but a very small part of the time and when there had never spoken in public: and during the whole Time I satt with him in Congress, I never heard him utter three Sentences together. The most of a Speech he ever made in my hearing was a gross insult on Religion, in one or two Sentences, for which I gave him immediately the Reprehension, which he richly merited. (Diary and Autobiography of John Adams)

For all Jefferson’s fame, it has not been lost on historians that his Declaration of Independence bears much in common with the beginning of George Mason’s Virginia Declaration of Rights, adopted by that state just one month earlier:

I. That all men are by nature equally free and independent, and have certain inherent rights, of which, when they enter into a state of society, they cannot, by any compact, deprive or divest their posterity; namely, the enjoyment of life and liberty, with the means of acquiring and possessing property, and pursuing and obtaining happiness and safety.

Nor was it lost on Jefferson himself that the birth certificate of the nation was fraught with contradiction. Most notably, that despite acknowledging the unalienable rights of Life, Liberty and the Pursuit of Happiness, and self-evident equality of all men, it made no effort to defend these rights among a large segment of the population currently being denied them. At least not in the final draft. Jefferson writes that prior to approval of the Declaration, the original clause…

…reprobating the enslaving the inhabitants of Africa, was struck out in compliance to South Carolina and Georgia, who had never attempted to restrain the importation of slaves, and who on the contrary still wished to continue it. Our Northern brethren also I believe felt a little tender under these censures; for tho’ their people have very few slaves themselves yet they had been pretty considerable carriers of them to others. (The Social Science Review, 1865)

The nation would have to wait nearly a hundred years to begin enforcing its own credo.

On July 4, 1776, the Continental Congress signed the Declaration and shipped it off to King George III.

Actually, no. Congress President John Hancock sent two copies of the Declaration to King George on July 5, 1776, printed with only his own name and that of Secretary Charles Thomson’s. But the Declaration wasn’t signed by the full Congress until August 2, and those names weren’t made public knowledge until the following year. 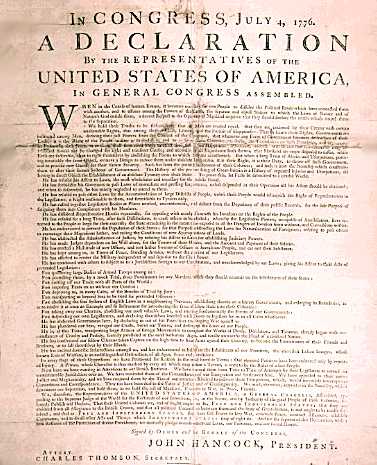 Today the Declaration of Independence is remembered as a whiny list of petty greivances scribbled by a band of traitors with absolutely no legitimate legal authority. Or, at least that’s how it might be remembered today had the insurrection been less successful.

[In 1989 a man purchased a $4 painting at a flea market because he liked the frame. When he removed the picture, he found an original 1776 Dunlap Broadside Declaration of Independence print. It was appraised as one of the 3 best preserved of the 25 known to exist, and last sold in 2000 for $8 million.

So today, Americans, enjoy your hot dogs, your fireworks, and your independence, and maybe check out that flea market you’ve been eyeing…]

Text of Declaration of Independence

History of Declaration of Independence

Epitaph: Apparently John Adams did have a soft spot for July 4 after all. Both he and Thomas Jefferson died on July 4, 1826, the country’s 50th birthday.