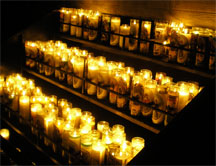 February 2 marks the sacred day in ancient Jerusalem when Jesus’s woodchuck poked its head out of the ground and declared six more weeks of Imbolc.

Wait, no, so is Groundhog Day the modern equivalent of the Purification of Mary? Is Candlemas a pagan holiday? And how often is Puxasawquantalahacwney Phil the Prognosticating Groundhog right?

According to Christian tradition, Candlemas (February 2nd) falls 40 days after Christmas, and marks the day Mary and Joseph took their 40 day-old baby Jesus to the temple for presentation and purification, as the Jewish laws of the time commanded:

Then the woman must wait 33 days to be purified from her bleeding. She must not touch anything sacred or go to the sanctuary until the days of her purification are over.” – Leviticus 12

When the days were completed for their purification according to the law of Moses, they took him to Jerusalem to present him to the Lord…”

where the devout Simeon beheld the 5 week-old baby and proclaimed:

“Mine eyes have seen Your salvation, which You have prepared in the presence of all peoples, a light of revelation to the Gentiles, and the glory of Your people Israel.”

The first recorded commemoration of the event comes from the famous globe-trotting 4th century nun Etheria (also Egeria) on her trek to Jerusalem. She writes:

The 40th day after the Epiphany is undoubtedly celebrated here with the very highest honor, for on the day there is a procession, in which all take part…and all things are done in their order with the greatest joy, just as at Easter. All the priests preach, and after them the bishop, always taking for their subject the part of the Gospel where Joseph and Mary brought the Lord into the Temple on the 40th day, and Symeon and Anna the prophetess…saw Him..and of that offering which His parents made.” 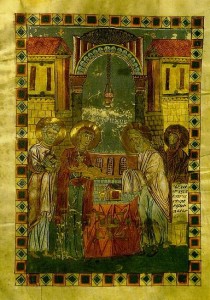 The changing of the date and the emphasis on “Purification of the Virgin” came when the holiday was celebrated in Rome.

Egeria’s 4th century description of Jerusalem’s annual celebration gives creed to the theory that the Presentation/Purification was not “invented” to stem other pagan holidays; however, its popularization and transformation in the West into Candlemas may have been a response to the pagan festivals of Europe.

Candlemas represents the day the priest would bless the candles to be used throughout the year. Originally…

“Roman Christians borrowed the practice of using candles in the religious services from the Romans, and in AD 494 Pope Gelasius I set the day of the Feast of the Purification of the Virgin Mary at the time of the popular Lupercalia.”

All Around the Year, Jack Santino

“Originally, the feast was celebrated on February 14, the 40th day after Epiphany (January 6), because Christmas wasn’t yet celebrated as its own feast, and so the Nativity, Epiphany, the Baptism of the Lord, and the feast celebrating Christ’s first miracle at the wedding in Cana were all celebrated on the same day. By the last quarter of the fourth century, however, the Church at Rome had begun to celebrate the Nativity on December 25, so the Feast of the Presentation was moved to February 2, 40 days later.”

On February 2 though the festival now competed with the Celtic Imbolc (or Oimelc) on February 1 and 2. A candle would be lit in every window to honor the Mother Goddess Brigit who was associated with fire.

In the 1970s the Catholic Church changed the name to the “Presentation of Christ in the Temple,” reducing the emphasis on Mary’s purification.

But in Latin American and some European countries the holiday still refers to the Virgin Mary: