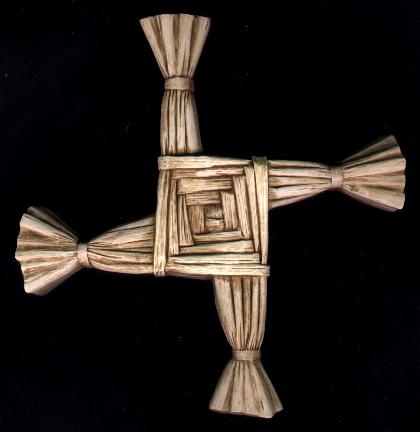 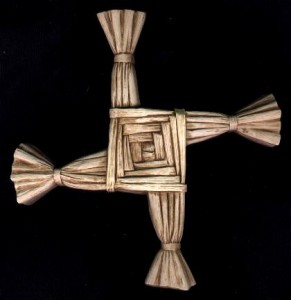 Brigid was a Celtic goddess whose festival was celebrated on February 1st and 2nd. Brigid’s Day, or Imbolc, heralded the middle of Winter and anticipated the coming of Spring. It was a festival of purification. (The word February itself comes from the Latin Februus, the god of purification and the dead.)

The Catholic church has been at odds with Brigid’s legacy for most of its existence. The bishops of Ireland found the goddess’s pagan following to be too deeply embedded in local tradition to be stomped out. Even the newly-converted Irish Christians refused to stop worshipping their exalted patroness. The Church decreed, If you can’t win ’em, join ’em. Brigid became Saint Brigid.

Over the centuries two Brigids emerged. One Brigid was transformed into Mary’s “midwife” at the birth of Jesus. (The position of Jesus’s mother was taken.)

In the other the she became the daughter of a Druid father ( and in some stories of a Christian mother from Portugal kidnapped by pirates!) and was named after the Celtic goddess. She lived from 451 to 525. She was known for her generosity as a young woman, and devoted herself to God, deflecting proposal after proposal from eligible suitors. She was baptized by St. Patrick himself and became a devout nun and Abbess, eventually founding the Abbey at Kildare in the 5th century.

In the Celtic tradition the Abbey at Kildare is believed to have preceded the so-called Saint herself. It was an ancient shrine to the Goddess before Christianity ever reached the Emerald Isle. There priestesses kept alight an eternal flame at the shrine until the 1220s when a Bishop, angered by the Abbess’s ‘no men allowed’ policy and the Druidic rituals, ordered the sacred flame to be put out.

The last insult to Brigid was her expulsion from the list of Saints in the 1960s. During Vatican II she was decanonized due to insufficient proof of her existence, after volumes of creative embellishment written about the supposed nun’s life and deeds over the centuries.

Brigid is affiliated with wisdom, healing, metal-work or craftmanship, flames and fire, and childbirth, even though she was a virgin in the Christian tradition.

“When we face the possible end of a relationship, when our bills are higher than the tiny resources we have, when we are emotionally drained by negative working conditions–it is all too easy to cling to what we have known previously…Brigid tells us otherwise…transformation is the only way to survive.“

Likewise Imbolc is the transformation of winter into spring.

In writing of St. Brigid, the Catholic Patroness of Ireland, (1907) Joseph Knowles notes:

“St. Brigid received from her people a worship which history accords no other saint…She was the light that shone over their Island to direct the footsteps of the daughters of Erin in the paths of virtue and sanctity. In speaking of her they discarded the prefix Saint, and called her, in homely, yet reverent fashion, “Mo Brighe”–or “My Bride.“

Note how Knowles reverses the carry-over from Brigid’s pre-Christian goddesship.

In the British Isles Brigid’s Feast and Imbolc merged with Candlemas. Both involves the ancient druidic lighting ceremony and purification rites, originally meant to honor Brigid. Some calendars list February 1 as Imbolc, others February 2. Most likely the celebration began on the evening of February 1 and concluded the following day, as was the tradition of the time.

“Do a self purification rite with Elemental tools–

cleanse your body with salt (Earth)

your thoughts with incense (Air)

your will with a candle flame (Fire)

your emotions with water (Water)

and your spiritual body with a healing crystal (Spirit)

Bless candles that you will be using for rituals throughout the year.

Take a Nature walk and look for the first signs of Spring.”

One ritual of Brigid’s Day was to plant or hang straw cross from the previous year’s harvest around the outside of the house and in the rafters in honor of the goddess of flame, to protect the house from fire. “An odd gesture,” writes Patricia Monaghan, “for a collection of old straw ornaments in the attic seems to encourage, rather than prevent, house fires.“

On Imbolc 1993 the Brigidine Sisters of Ireland relit the Kildare flame.

Brigid: the Goddess Who Wouldn’t Die

Brigid: the Survival of a Goddess

Brigid of the Celts

Brigit the Exalted One

4 Replies to “the 1st of February belongs to Brigid…”