For over six centuries, England celebrated March 25 as the first day of the new year, up until the adoption of the Gregorian Calendar in 1752.

Being stapled to one solar calendar for so long, it’s hard for us to understand how this is possible. I mean, March 25 isn’t even the first day of the month, let alone the first month of the year.

But remember, for much of antiquity, the agrarian world straddled two systems of keeping track of time. The months, which mirrored the lunar cycles, and the years, which followed the quarter days (solstices and equinoxes) of the sun.

The Spring Equinox, with its natural imagery of rebirth and fertility, was deemed the logical start of the new year, a tradition held in societies as far apart as pre-Muslim Persia, Mayan Mexico, and Celtic Europe. No matter what calendar Rome imposed on the latter of the three.

Lady Day is so-named because it falls on the day of the Annunciation, celebrated on March 25, precisely nine months before Christmas. The Annunciation marks the visit of the Angel Gabriel to the Virgin Mary and the conception of Jesus Christ. Thus the New Year on March 25 honors the first moment of the incarnation of Jesus. 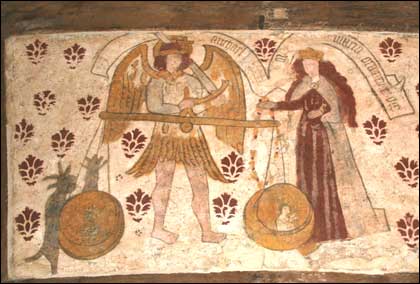 And when the tenants come to pay their quarter’s rent
They bring some fowle at Midsummer, a dish of fish in Lent,
At Christmasse a capon, at Michaelmasse a goose;
And somewhat else at New-yeres tide, for feare their lease flie loose.

September 29 is the Feast Day of the Archangel St. Michael and All Angels.

The archangel Michael is featured prominently in both the Old and New Testaments, as well as apocryphal writings such as the book of Enoch. The appeal of the Archangel spread throughout Christendom during the Middle Ages. Perhaps because of his position as the leader of the army of angels in Revelation, Michael became the patron saint of knights, whom fighters called upon in times of battle.

He is also the “good guy” Angel of Death–the one with wings and a scale, not with a black cloak and scythe. Michael’s symbolic scale was believed to weigh the souls of the recently deceased, to determine their worthiness in heaven. Fittingly, St. Michael’s Feast falls during the zodiac sign of Libra, the scales.

Just as the figure of Michael replaced pagan deities such as the Germanic Wotan (Norse Odin) and the Greek Hermes during the conversion of Europe, his feast day on September 29 replaced nature-based celebrations of the autumnal equinox and the harvest. During the Middle Ages, the equinox fell on or around September 29.

In England, Michaelmas was one of the four quarter days by which debts and suits had to be settled, falling roughly on the solstices and equinoxes: Lady Day (March 25), Midsummer Day (June 24), Michaelmas (September 29) and Christmas (December 25).

Geese, which were fat and hardy this time of year, were often given to landlords and creditors as part of repayment. Goose became the traditional meal of Michaelmas, and a symbol of good luck; hence the saying:

In the Church of Latter-Day Saints, before Michael became an angel, he was Adam, the first man. Jehovah’s Witnesses, meanwhile, believe that Michael and Jesus are but one and the same.

Michaelmas was considered the last day to safely eat the season’s blueberries.

…We’ll pick in the Mortenson’s pasture this year.
We’ll go in the morning, that is, if it’s clear,
And the sun shines out warm; the vines must be wet.
It’s so long since I picked I almost forget
How we used to pick berries: we took one look round,
Then sank out of sight like trolls underground…

from Blueberries by Robert Frost