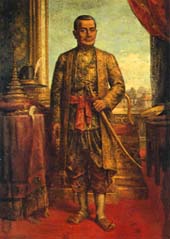 In Thailand, you don’t mess with the King. Not even to be funny.

In 2002 a Philadelphia restaurant/bar called St. Jack’s used a likeness of the King to promote an dance night event. They gave him a buzz cut with bleached Vanilla Ice lines, and plenty of bling bling. Word of the ad made news in Thailand, and the government threatened to cut off ties with the U.S. unless the ad was removed.

In his youth, Tong-Duang, the future King Rama I, was a royal page under King Uthumporn. At the Royal Palace he met fellow page Taksin.

“According to legend, when [Taksin] and his friend Tong-Duang were priests they met a Chinese fortune-teller who told them that they both had lucky lines in the palms of their hands and would both become kings.”  — spiritus-temporis.com

Taksin indeed went on to become a remarkably successful military leader, and later King, who turned the tide in the war against the Burmese.

The reigns of the kings preceding Rama, including Taksin, were dominated by ongoing struggles with the Burmese.

Rama was general to King Taksin, who was a popular king, but whose success went to his head. According to legend, he became a megalomaniac, declared himself an incarnation of Buddha and executed nobles for refusing to agree. He was deposed on April 6, 1782 and Rama, his leading general, became King, thus fulfilling the fortune-teller’s prediction.

Rama is remembered for many innovations, chief among them, moving the capital of Siam to Bangkok, where it has remained for over two centuries. The Rama line descends directly from him.

The present king of Thailand, King Bhumibol Adulyadej is Rama IX. Born in Boston, Massachusetts in 1927, he was not originally in line for the throne.  In 1932 an insurrection reduced the powers of the king, and enforced parliamentary procedure. The king at the time was forced to abdicate in favor of his nephew.

King Bhumibol Adulyadej ascended to the throne in 1946. He is the longest (currently) reigning head of state in the world.