September 17 is one of the most important dates in U.S. history. In fact, it’s known as Citizenship Day, yet most Americans would be hard-pressed to tell you why.

On September 17, 1630, the city of Boston—North America’s cradle of liberty—was founded by some of the country’s first immigrants.

Governor John Winthrop and the Massachusetts Bay Colony Puritans christened the 780-acre peninsula after the town from which many of them hailed. Boston, Lincolnshire, in England was a city about 100 kilometers north of London, named for a 7th century English abbot, St. Botolph. Botolph’s Town was shortened to Bo’s’town, and later to Boston. (Tale of Two Bostons)

Wee shall be as a Citty upon a Hill, the eies of all people are uppon us.

But that’s not why September 17 is Citizenship Day.

No, September 17 was the day in 1814 that a 35 year-old lawyer-poet printed a poem based on his experiences in the bombardment of Baltimore in the War of 1812.

In August 1814, Francis Scott Key had been sent on a mission to negotiate the release of a popular, elderly American physician captured by the British. The British agreed to do so, but because Key had heard of the planned attack on Baltimore, he was forced to stay a captive aboard a British vessel during the battle. The next morning, Key was inspired to see the star-spangled American flag waving defiantly above Fort McHenry. Key’s poem was set to the tune of an old English drinking song and eventually became the country’s national anthem. (Star-Spangled Banner)

But that’s not why today is a national holiday.

Nope. In fact, September 17, 1862 was the bloodiest day in American history.

Troops under Confederate General Robert E. Lee and Union General George McClellan faced off at the Battle of Antietam in Maryland. By day’s end over 20,000 Americans would lie dead or wounded. The horrific battle was a draw, but the devastating loss of men forced Lee to halt his invasion of the North. (Battle of Antietam)

For President Lincoln, it was a much-needed, well, tie. He’d been waiting for a Union victory to issue his proclamation to end slavery, without it looking like a last-ditch act of desperation on behalf of the North, which had been losing battle after battle. Five days after the carnage of Antietam, Lincoln announced that as of January 1, all slaves in areas of rebellion would be free.

But again, that has nothing to do with September 17 being Citizenship Day.

Citizenship Day honors perhaps the most important date in American history. Yet you will hear no fireworks, see no parades or marching bands, and you won’t get a day off school or work. Unless you’re in grade school, you will probably go throughout your day without any sign of its passing.

If you are in grade school, however, U.S. federal law mandates that your lessons this week include instruction on the document created on this day in 1787 by the Constitutional Convention in Philadelphia.

That’s right, September 17 is Constitution Day in the United States, aka Citizenship Day. Before the Constitution, the Articles of Confederation had kept the newly-independent states loosely “united”, but made no provisions for a central government with any practical power. The Articles’ weakness was made apparent by a rebellion of irate farmers’ (Shay’s Rebellion) that U.S. troops were unable to stem, and which was finally put down by state militia.

A convention of state delegates convened in 1787 to resolve the problem of the Articles. James Madison, a 5’4″ Princeton graduate and a delegate from Virginia, was 36 years old at the time. His studies of political theory and European governments convinced him that only a system of checks and balances could prevent a strong government from descending into tyranny. Madison, who would be the country’s fourth President, is also considered the Father of the Constitution.

In addition to checks and balances between the executive, legislative, and judicial branches, the Constitution’s secret to longevity was a self-contained instruction guide for amending itself. The first ten amendments, ratified in 1791, guaranteed the states that the Congress of this new powerful, strong central government would pass no law restricting essential freedoms.

The Constitution was amended just five times over the next 100 years. Over the past 100 years, it’s been amended another dozen times.

The most recent amendment to the Constitution was the 27th Amendment, which restricts pay raises of Senators and Representatives:

No law, varying the compensation for the services of the Senators and Representatives, shall take effect, until an election of Representatives shall have intervened.

The amendment holds the record for the longest stretch between the proposal and ratification. The Amendment was introduced in 1789 as the second of twelve proposed amendments, ten of which became of the Bill of Rights. The 27th amendment was passed in 1992, after only two centuries in Congressional purgatory. (And they say nothing ever gets done in Congress!)*

In 2005 Congress changed “Citizenship Day” to “Citizenship Day and Constitution Day” to explicitly remind those of us out of school what today represents, and on the continuing struggle to form “a more perfect Union.” 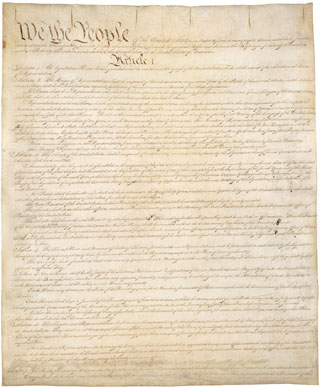 *(In fairness to Congress, I should point out it wasn’t entirely their fault it took 202 1/2 years to pass an amendment. The amendment had to be ratified by 3/4’s of the states. Only 6 states ratified it initially, 4 short of the 10 necessary back when there were only 13 states. In 1992, the amendment finally reached the 3/4’s mark when Alabama became the 38th state to ratify it.)

One Reply to “Citizenship Day”