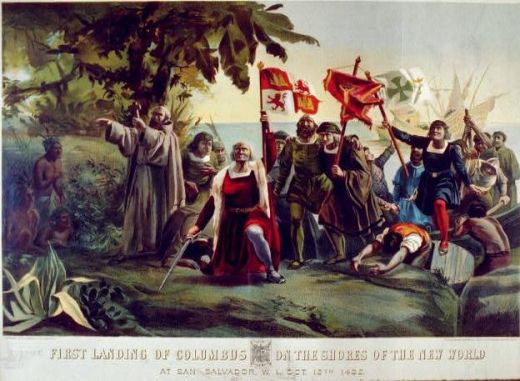 October 12, 1492. Perhaps no date in Pan-American history is as important or controversial.

By October 11, 1492, Columbus’s crew had had enough. The trip was too long. They had spotted weeds and birds—signs of land—for weeks, but not a hint of soil. And at the rate they were going, many were afraid there would hardly be enough headwind to take them back to Spain.

Each day, Columbus lied to the men about how far they’d traveled, so as not to worry them more about the distance between themselves and civilization.

Finally a sailor aboard the Pinta by the name of Rodrigo de Triana spotted a speck of land on the horizon. On October 12, Columbus disembarked at an island in the Bahamas whose exact location is lost to history, and met with the island’s residents. His first impressions were that the people were young (all under 30), unclothed, painted black or various colors, and were a people who could be easily converted to Christianity, as “it seemed to me they had no religion of their own.”

Also, he noted how when he showed them his sword, they had never seen such a thing. They gripped it by blade and were surprised to find themselves cut. It was a foretelling symbol of the future of the two peoples and their relations.

Throughout much of the Americas, Columbus is derided as the bringer of devastation to two continents and the precursor to the genocide of millions of people.

“When Columbus sent back hundreds of Taino indians to be sold as slaves, Queen Isabella ordered them free and returned to their land.  Eventually, the European colonists and sovereigns became so discontent with Columbus’ mismanagement that he was arrested and shipped back to Spain in chains. He spent the rest of his life trying to regain his governorship over Hispaniola.

“The government of Columbus was brutal and violated human dignity and the moral senses of his contemporaries.  He was the first to establish institutions of slavery and brutal conquest that would lead to the demise of the nations and people who already called the Western Hemisphere their home.

Historians have still not settled upon a psychological portrait of the man around whom so much of world history hinges upon. Unlike the kings of the day whom history recorded so fastidiously, Columbus was a relative nobody until 1492.

And that may be the root of his popularity in 18th and 19th century United States. Here was a man not descended from royalty, but who attained fame and (supposedly) fortune merely by heading west into the great unknown—a fitting hero in the days of “manifest destiny.”

Had Columbus turned back on October 11, the New World would never have been discovered, and the indigenous tribes of the Americas would have lived in peace for hundreds of years. Unlikely. The idea had flourished in Europe that if the world was round a quicker way to the Orient must exist, and had Columbus turned back, it was only a matter of time before others would go the distance. Whether the actions of another discoverer could have stemmed the brutality, slavery and genocide, we will never know.

Today in the United States, over 500 years later, Columbus is one of four individuals honored with a federal holiday. The others are Martin Luther King Jr., George Washington, and Jesus Christ.