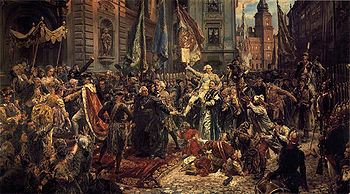 May 3 is Constitution Day in two countries on opposite sides of the globe.

The 1997 Constitution was a response to Poland’s changing position in the world, from a one-party socialist state under the control of its powerful neighbor, the Soviet Union, to a multi-party independent state.

The Japanese Constitution was put into effect on May 3, 1947. Its creation dealt with Japan’s changing role in the world after World War II. The Constitution altered not only the government—a government in which the Emperor would have less say in matters of state—but also the Japanese way of life. The Constitution protects standard basic freedoms, such as freedom of speech, freedom of the press, and freedom of religion, but goes one step further. Article 19, for example, proclaims:

“Freedom of thought and conscience shall not be violated.”

One of the most long-reaching impacts of the Constitution is Article 9, which deals with the renunciation of warfare:

“Aspiring sincerely to an international peace based on justice and order, the Japanese people forever renounce war as a sovereign right of the nation and the threat or use of force as means of settling international disputes. In order to accomplish the aim of the preceding paragraph, land, sea, and air forces, as well as other war potential, will never be maintained. The right of belligerency of the state will not be recognized.”

So you’re probably thinking, No military? I could go over there with a dinghy and a BB gun and take over the country!

You would be met with a surprisingly powerful defense force. Japan still maintains its ability to defend its homeland, and…

“By 1990 estimates of Japan’s defense budget were that it was either the third or fourth largest in the world and Japan’s SDF was a high technology fighting force.”

The Rule of Law in Japan — Carl F. Goodman

Japan’s Constitution Day falls right in the middle of “Golden Week”, a congruence of four holidays, beginning with Showa Day (April 29) and ending with Children’s Day (May 5).

Japan’s Commission on the Constitution — the Final Report, 1980