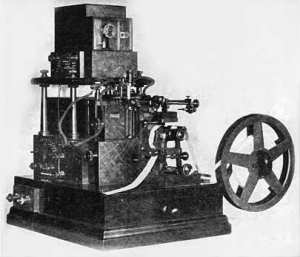 Today’s a good day to reach out and call (or Skype) that friend across the Pond. It’s Cross Atlantic Communication Day, marking the anniversary of the first sustained working telegraph cable between Europe and the Americas.

Before 1866, it took ten days for a message to cross the Atlantic by ship. An early form of the telegraph had been used in Germany as early as 1809, but it wasn’t until the 1830’s that related crucial innovations made the invention commercially viable.

Charles Wheatstone and William Cooke patented the first commercial telegraph in the UK in 1837. That same year inventor Samuel Morse developed a telegraph system in the US, using the language that would come to dominate the wires: Morse Code. In 1844 the U.S. installed a telegraph wire from Washington DC to Baltimore, whereupon Morse relayed its first now-famous message: “What hath God wrought?”

The idea of trans-Atlantic cable connecting Europe and the Americas appealed to several luminaries, but it’s generally seen as the brain-child of entrepreneur Cyrus Field, who raised the cash and made the first attempt in 1857. The 1,700m miles of cable was too big for any one ship to carry, so two were employed, the USS Niagara and the HMS Agamemnon. The two ships met up in the middle of the Atlantic, their two wires were spliced together, and they headed out in opposite directions, laying cable as they went. The cables broke multiple times, and the mission was eventually abandoned. The following summer, after several trials of errors, they set out again, and this time completed the mission, connecting a spliced cable from Newfoundland to Ireland.

On August 16, 1858, the first trans-Atlantic telegraph message was sent: “Glory to God in the highest; on earth, peace and good will toward men.” Followed by messages of goodwill and congratulations by Queen Victoria and President Buchanan.

“May the Atlantic telegraph, under the blessing of heaven, prove to be a bond of perpetual peace and friendship between the kindred nations, and an instrument destined by Divine Providence to diffuse religion, civilization, liberty, and law throughout the world.” — President James Buchanan

The two countries celebrated, but over the next few weeks the connection deteriorated, and finally gave out.

No one tried again for several years, and a Civil War engulfed the States. But in 1865, Cyrus Field tried again. Now there had been built one ship large enough to carry the whole cable: the Great Eastern, which was four times larger than any other ship in existence. Captain by Sir James Anderson, the Great Eastern traveled from Ireland to Newfoundland laying cable as it went. After over 1,000 miles the cable snapped, and the mission was abandoned.

The mission finally succeeded the following year when the Great Eastern lay another, more durable cable between the two coasts. The first sustained trans-Atlantic telegraph cable was completed on this day, July 27, 1866.

“It is a great work, a glory to our age and nation, and the men who have achieved it deserve to be honoured among the benefactors of their race.” — The Times, July 28, 1866

[The predecessor of the electric telegraph dated back to 1746, and it wasn’t used to send messages. French monk and scientist Jean-Antoine Nollet had 200 of his brethren stand around in a mile-round circle holding an iron wire and proceeded to shock them all, observing that the monks felt the shock at roughly the same time.]