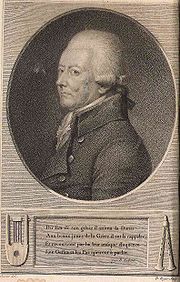 Today’s International Dance Day, which is celebrated on April 29, believe it or not, because of this guy.

Stuffy as he looks, Jean-Georges Noverre could apparently cut a rug in his day. He began dancing professionally at age 16 and wrote his first ballet at 20. He danced in Paris, London, Vienna and Strasbourg, and was head of the Paris Opera Ballet until his boss, Marie Antoinette, lost her own head. Noverre was allowed to keep his, but the French Revolution ended his career and reduced him to poverty.

When times were good he hung with the likes of Mozart, Voltaire, and Frederick the Great. His ideas revolutionized ballet. He believed a dancer’s personality is part of performance, rather than the one-size-fits-all training technique commonly taught. He believed all dances and movements must be integrated into the story, character and theme, and did away with superfluous numbers.

Criticizing the masks traditionally worn in Paris ballet that hid dancers’ genuine expressions, he wrote, “Destroy the masks and we shall gain a soul.”

So tonight, put on your red shoes, your dance shoes, your boogie shoes, turn on the red light, get down, make love, let it all hang out, and shake it like a polaroid picture.

One Reply to “Everybody Dance Now – International Dance Day”