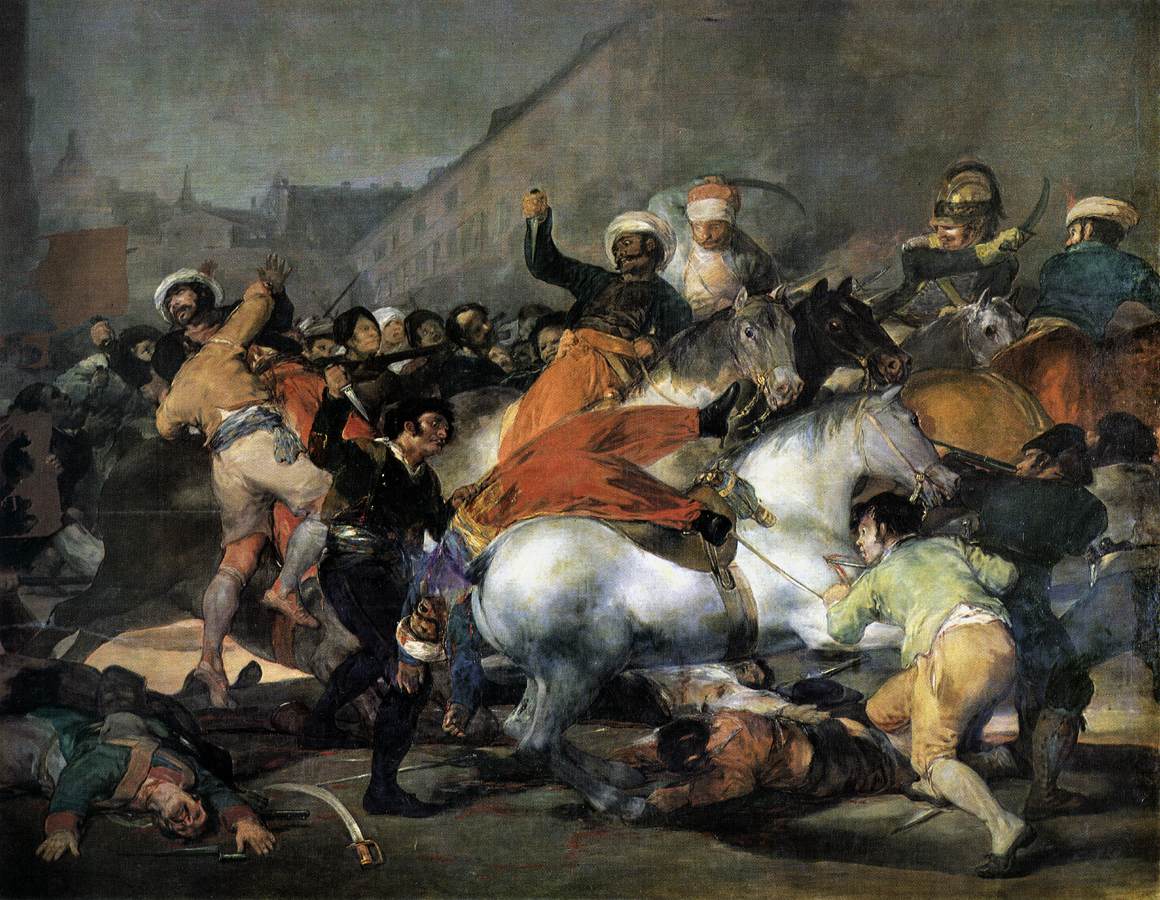 “The population of Madrid, led astray, has given itself to revolt and murder. French blood has flowed. It demands vengeance…”

Guerrilla warfare. To any kid who’s failed a spelling bee because of one of the most misspelled words in the English language, you’re in good company. Before learning the proper spelling, I too assumed it was war that took place deep in the African jungle.

The term ‘guerrilla warfare’ is used to describe tactics adopted by small militias and individual fighters, often in Third World countries, to engage larger occupying forces in small skirmishes rather than large battles. It comes from the Spanish word “guerra”, meaning war. And though guerrilla warfare has been a key component in dozens of South American conflicts over the last century, the term guerrilla hails from the other side of the Atlantic, from a conflict that began 200 years ago in Madrid.

In 1807 Napoleon signed an alliance treaty with Spain, which effectively split the country of Portugal between Spain and France. Portugal was taken without hardly firing a shot.

The following February, however, Napoleon turned on his Spanish ally. (A history lesson not lost on Hitler.) Napoleon didn’t even need to invade Spain; for the country was already inundated with French troops who had crossed the border under the pretense of invading Portugal. Meanwhile, Spain’s troops were scattered from Denmark to Portugal, many of them on loan to Napoleon. Spain was, militarily speaking, screwed.

Add to the plot a cast of wacky feuding royals (In March, Prince Ferdinand overthrew his father King Charles IV with the support of a discontented Spanish public) and you have the makings of a full-on Peninsular War.

Napoleon ingeniously played the Spanish royal pair against each other, calling father Charles and son Ferdinand up to French Bayonne for a little ‘mediation‘. [pronounced: ‘im·pri′son·mènt’]

Come Leap Day, French troops entered Barcelona–by pretending to be a convoy of wounded–(and you wonder why the Spanish don’t trust the French?)–and took the city. The French general Murat entered Madrid the following month.

About this time the Madrilenos began thinking maybe their beef was not with either of their kings, but with the French. Napoleon ordered the remainder of the Spanish royal family, including Charles’ 25 year-old daughter Maria Louisa, her uncle Don Antonio, and her little brother, the preteen Francisco de Paula, to join them in French Bayonne for a little more ‘mediation’.

“The following morning had been fixed for the departure of the Queen of Etruria [Maria Louisa] and the Infante D. Francisco de Paula, and many persons, chiefly women, collected before the Palace to see them off…and some of the populace” were “determined that the last of the royal family should not be taken from them without resistance...” History of the Peninsular War (Southey)

An armed riot broke out, and Murat’s forces fired on the crowd. Soon, street fighting erupted through Madrid, focusing around the palace and the Puerta del Sol.

For a short time the Madrilenos pushed back the surprised French guards, but Murat sent in reinforcements, and quashed the outgunned Spanish rebels by nightfall.

On May 3, hundreds of Spanish rebels were executed by firing squad. News of the mass killings spread throughout Spain and the Spanish resistance was born. Guerrillas, referring to ‘little wars’ and the soldiers who fought them, changed the course of the Napoleonic era, not by defeating the French in large, decisive battles, but by engaging them in a steady stream of small attacks over thousands of square miles.

In February Napoleon had bragged he could take Spain with 12,000 men. He did take Spain, but he had to divert 160,000 of his troops from other battles to do it.

Napoleon called the guerrillas his ‘Spanish ulcer’. In 1813 British, Portuguese, and Spanish forces expelled French troops from the Iberian peninsula for good.