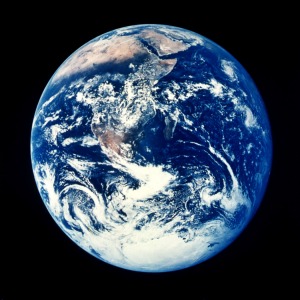 This has nothing to do with giant killer asteroids nearly demolishing the planet. (That’s Near Miss Day, celebrated on March 23, the anniversary of the the day in 1989 that a 1000-foot asteroid passed the spot Earth had been six hours earlier.) No, Earth Overshoot Day is a symbolic measure of humanity’s energy consumption, and it falls on a different day each year.

“…before that time [1986] the global community consumed resources and produced carbon dioxide at a rate consistent with what the planet could produce and reabsorb. By 1996, however, humanity was using 15 percent more resources in a year than the planet could supply, with Earth Overshoot Day falling in November.”

According to Top Scientists, we now use approximately 40% more energy than the Earth is capable of sustaining. That means this year (2009) Earth Overshoot Day falls on September 25.

The good news is that Earth Overshoot Day was September 23 in 2008. So maybe we’re headed it the right direction. Of course, 2008 was also a Leap Year, so don’t go celebrating just yet. And if you do go celebrating, don’t start a tire bonfire.

2010 Update: This year Earth Overshoot Day fell over a month before last year’s. Definitely not a good sign. The good news is, now that we’re past Overshoot Day, we can consume all the energy we want since it won’t count toward next year. Right? At this rate, we’ll be celebrating Overshoot Day in January by the end of the next decade.

2011 Update: The good news: Even as we reach 7 billion people, this year’s Earth Overshoot Day is over a month later than last year’s. Is the world getting more efficient? Time Magazine says no. “Amid Paeans to Energy Efficiency, World is Getting Less Efficient”