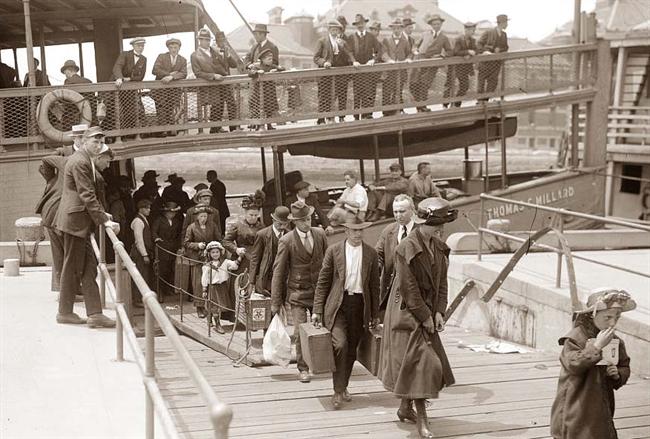 On Thursday evening, December 31, 1891, the S.S. Nevada arrived in New York Harbor. Among its passengers were 14 year-old Annie Moore of Cork County, Ireland, and her two younger brothers, Anthony and Phillip. They had sailed to America to join their parents in New York City’s Lower East Side.

On the morning of January 1, 1892, Annie’s 15th birthday, a barge transported the three Moores and the 145 other steerage passengers to a brand new federal immigration center called Ellis Island, where the rosy-cheeked Annie became the first immigrant of the twelve million who would enter the United States through its doors.

“As soon as the gangplank was run ashore, Annie tripped across it and was hurried into the big building that almost covers the entire island. By a prearranged plan she was escorted to a registry desk which was temporarily occupied by Mr. Charles M. Hendley…” “Landed on Ellis Island” NY Times 1/2/1892 (pdf)

Over 100 million Americans — roughly a third of the U.S. population — can trace their roots back to the immigrants of Ellis Island, starting with Annie Moore.

That first day, Ellis Island welcomed three steamships and 700 passengers. Nothing to compare with the thousands who would soon be entering the country through the island each day.

April 17 (Ellis Island Family History Day) marks the anniversary of the date in 1907 when more immigrants passed through Ellis Island than on any other day: 11,747, more than twice the usual number. 1907 alone saw the arrival of over a million immigrants.

Though the first immigrants were Irish, about half of all those who passed through Ellis Island in its heyday were of German descent.

The “Statue of Liberty Enlightening the World” (the statue’s official name) was completed four year prior to Ellis Island’s opening. The statue was the first glimpse of America for the millions of immigrants who sailed into New York Harbor on the way to Ellis Island between 1892 and 1924. After 1924, quotas and restrictions greatly reduced emigration to America. Still, Ellis Island served as an entry point for war refugees and displaced persons until its closure in 1954.

The Island reopened as a museum in 1990 which is now run by the National Park Service as part of the Statue of LIberty National Monument.

It generally took arrivals three to five hours to go through the immigration process, longer for those suspected of or diagnosed as being ill. Hopefuls had to pass literacy tests and “examinations as to moral and physical fitness.” (NYTimes 6/27/1920)

About 2% (250,000) were sent back to their home countries on account of incurable illnesses. For curable illnesses, Ellis Island was the site of the one of the largest public healthcare operations in early 20th century America. The medical complex occupied 22 buildings, and in 1914 alone it treated over 10,000 patients from 75 countries.

The first Ellis Island Family History Day was observed in 2001. The holiday has been officiated via proclamations by state governors.

The Ellis Island Immigration Museum has received 20 million visitors since its opening in 1990, more than the number of immigrants it naturalized during its 62-year career.