Today is the anniversary of the Farakka Long March in 1976. The march protested the construction of the Farakka dam, aka the Farakka Barrage. The dam is located just 11 miles from the border of Bangladesh, and it diverts up to 200,000 gallons of water per second from the Ganges River that would have flowed to Bangladesh.

“If ever there was a lesson in the unintended effects of damming rivers, the Farakka Barrage is probably it…

“Although the barrage, the longest in the world, was originally intended to divert water from the Ganges into the Hooghly River during the dry season and rescue the Kolkata port 257 km downstream, the government in Dhaka has accused India of using it to turn parts of Bangladesh into a desert, raising salinity, affecting navigation and adversely influencing the environment, agriculture and fisheries. ”

In India, the dam has not only contributed to the problem it was intended to fix (the silt build-up in Kolkata harbor), it may even cause bigger problems, such as the merging of two of the Ganges’ major tributaries.

“Critics say this is a product of the so-called “engineers’ racket,” a term coined by the Indian geographer Sunil K Munshi, to describe corruption resulting from greedy civil contractors working together with irresponsible state and federal governments. And it appears that now India will seek to undo the damage with a mammoth US120 billion plan to interlink its rivers, which originate in the Himalaya Mountains, with 30 interlinked canal systems that would deliver water to so-called Peninsular India.” (Iqbal)

Back in 1976, to protest the construction of the dam, populist leader Moulana Bhasani led a mass demonstration and march of thousands of Bangladeshis across approximately 100 kilometers. Since the 1970s, the two countries have engaged in talks attempting to come to a solution regarding the sharing of water.

Like the Ganges, the observance of Farakka Long March Day each year on May 16 tends to ebb and flow with the passing of time. On the anniversary of the march in 2005, a half million people gathered to protest the Farakka Barrage and the proposed Indian River Interlink Project. 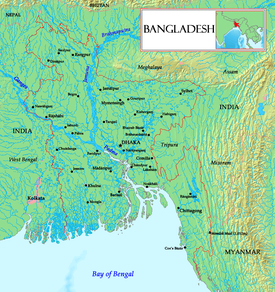 The damage caused by the dam is just one more problem Bangladesh has to worry about.

With over 160 million people in a space the size of Iowa (Iowa’s population by the way is 3 million), Bangladesh is one of the most densely populated countries in the world.

Contrary to news reports, Bangladesh is not an environmental disaster waiting to happen… It’s already happening. Bangladesh, the canary in a coal mine for the rest of the world, is “set to disappear under the waves by the end of the century” — independent.co.uk.

However, according to Professor Ainun Nishat…

“Although everyone says that 17% of the country will be under water, it is not sea level rise that we fear but the increase of salinity.”

— Bangladesh is Ready With a Climate Change Strategy

Many researchers believe that climate change may also increase the frequency of tropical cyclones, which routinely strike the Bangladesh coast. The deadliest of these—in fact the deadliest cyclone in recorded history—was the Bhola Cyclone of November 1970, which killed over half a million people.

Farakka, a Lost Battle for Bangladesh?

Farakka Barrage: Cause for Concern