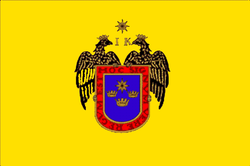 Today is the Foundation Day of Peru’s capital city. Francisco Pizarro founded Lima on January 18, 1535 as La Ciudad de los Reyes (City of Kings). Pizarro has been at various times the most reviled, revered, and again reviled figure in South American history.

Pizarro was a Spanish soldier in Panama who earned his stripes by bringing his former commander, pig-farmer-turned-Conquistador Vasco Nunez de Balboa, to Balboa’s rival, Governor Dávila. Dávila tried Balboa and his associates for allegedly betraying the Spanish crown and had them immediately decapitated. Dávila rewarded Pizarro by making him mayor of Panama City.

In the 1520’s, stories of gold and riches filtered north from the land that would be Peru. Pizarro joined forces with a priest (Luque) and a soldier (Almagro) to lead an expedition south in search of these treasures.

Their first expedition was a dismal failure. And while the second expedition succeeded in bringing back some treasure, it wasn’t enough to entice Panama’s new governor to approve a third. Not one to take ‘no’ for an answer, Pizarro sailed to Spain, and attained funding directly from King Charles and Queen Isabella.

Pizarro returned to Peru with less than 200 men. The Battle of Cajamarco in 1532, between those soldiers and, according to Spanish accounts, 80,000 Incas, is perhaps the most staggering military upset in recorded history.

The small pox virus, brought by Europeans, helped. Not only had small pox devastated the Incan population, it killed the previous ruler, leading to a civil war between the king’s sons.

Atahuallpa, the apparent victor of the fraternal struggle, commanded an army of tens of thousands. When he was invited to meet Pizarro at Cajamarca, he didn’t consider a force of 200 men any threat.

Historian Jared Diamond combines the testimony of 6 Spanish eyewitnesses into a full description of the battle in the chapter “Collision at Cajamarco” from Guns, Germs, and Steel, the text of which can be found here. Go there. Read it. Now.

“On reaching the entrance to Cajamarca, we saw the camp of Atahuallpa… We were so few in number and we had penetrated so far into a land where we could not hope to receive reinforcements. The Governor’s brother Hernando Pizarro estimated the number of Indian soldiers there at 40,000, but he was telling a lie just to encourage us, for there were actually more than 80,000 Indians.

Through a messenger, Francisco Pizarro invited Atahuallpa to meet with him at Cajamarco, promising, ‘I will receive him as a friend and brother… No harm or insult will befall him.’

“At noon Atahuallpa began to draw up his men and to approach…In front of Atahuallpa went 2,000 Indians who swept the road ahead of him… Many of us urinated without noticing it, out of sheer terror…”

“Governor Pizarro now sent Friar Vicente de Valverde to go speak to Atahuallpa… the Friar thus addressed him: ‘I am a Priest of God, and I teach Christians the things of God… What I teach is that which God says to using this Book…’

Atahuallpa opened the Bible, and showing no expression, tossed it on the ground.

“The Friar returned to Pizarro, shouting, ‘Come out! Come out, Christians! Come at these enemy dogs who reject the things of God. That tyrant has thrown my book of holy law to the ground!…’

“…The booming of the guns, the blowing of the trumpets, and the rattles on the horses threw the Indians into panicked confusion. The Spaniards fell upon them and began to cut them to pieces…

“Although we killed the Indians who held the litter, others at once took their places and held it aloft…Atahuallpa was captured, and the Governor took Atahuallpa to his lodging. The Indians carrying the litter, and those escorting Atahuallpa, never abandoned him: all died around him…

“When the squadrons of Indians who had remained in the plain outside the town saw the other Indians fleeing and shouting, most of them too panicked and fled. It was an astonishing sight, for the whole valley for 15 or 20 miles was completely filled with Indians…

“Six or even thousand Indians lay dead, and many more had their arms cut off and other wounds… It was extraordinary to see so powerful a ruler captured in so short a time, when he had come with such a mighty army. Truly, it was not accomplished by our own forces, for there were so few of us. It was by the grace of God…“

Pizarro explained to Atahuallpa that God permitted his defeat so that “you may know Him and come out from the bestial and diabolical life that you lead… When you have seen the errors in which you live, you will understand the good that we have done you…”

Atahuallpa offered to fill a large room with gold and treasure for his release. After Atahuallpa made good on his promise, Pizarro executed him anyway. But not before baptizing him.

Pizarro paved the way for three centuries of Spanish colonization in Peru. He crushed Cuzco and set up the city of Jauja as his capital in 1534, but it was too remote. The following year he established Lima; he later claimed that the creation of Lima was the greatest thing he ever did.

Today Lima’s 7.8 million residents celebrate the 475th anniversary of Pizarro’s founding, though its founder has grown less and less popular in Peru in recent decades. (I can’t imagine why.)

Here upon the plains
The Great Calichuchima
Was burnt at the stake by the conquistadores;
From the flames he called upon the sun for justice.
Now with its golden figure the same sun
Points to you, Pizarro,
The greatest criminal of the New World.