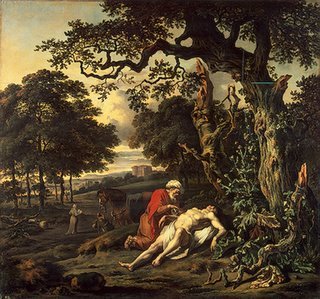 Last week, Warner Brothers released the long-awaited blockbuster Watchmen. Watchmen is based on a comic book about a group of not-your-run-of-the-mill superheroes in a dark, film noir alternate reality.

It’s a superhero story without heroes, but its antihero may be Rorschach, a masked vigilante who before donning a mask was Walter Kovacs, a New York City tailor. In the original Watchmen, a chance encounter with a woman named Kitty Genovese fundamentally changes Kovacs’ view of the world:

One day a young Italian-American woman comes into the shop and asks Kovacs to make her a dress from a special fabric. She doesn’t like the way it turns out and leaves it, so Kovacs keeps the material.

I’ll pause here to say that Watchmen blends fiction and reality so well it’s hard to know what’s true and what isn’t. Walter Kovacs/Rorschach is a fictional character. But Kitty Genovese is very real; and she’s why we observe Good Samaritan Involvement Day today, on March 13.

The oldest of five children, the real Kitty Genovese was raised in Brooklyn, New York. In 1964, the 29 year-old was living with her girlfriend Mary Ann Zielonko in the Kew Gardens neighborhood of Queens, New York, and working at a sports bar on Jamaica Avenue.

Mary Ann was sound asleep by the time Kitty drove up around 3 am. Kitty parked about 100 feet from her apartment. On her way to the apartment, Kitty was attacked and stabbed twice in the back by a strange man.

Kitty screamed for help. According to reports, several witnesses heard the screams, and her attacker fled.

But no one came out to help.

The killer came back to the scene ten minutes later to find Kitty barely conscious, lying near the back of the building, where she had staggered with her remaining strength. He stabbed her several more times, sexually assaulted her as she lay dying, and stole $49 from her wallet.

Police responded to a call that came after the second attack. Kitty died in the ambulance on the way to the hospital.

The killer, later identified as Winston Moseley, confessed to the murder without emotion, as well as to two other murders, telling police he simply wanted to kill a woman.

As cold-blooded as the killer was (44 years later, the  inmate still shows no remorse), he’s not the reason why psychologists study Kitty Genovese’s gruesome murder.

Two weeks after the murder, a newspaper article reported that the number of witnesses who either heard or saw parts of the murder was 38.

Later reports reduced this to a dozen or so witness. Still, her murderer, armed with only a knife, walked away from the crime without so much as a reprimand. An initial call to the police was not given high priority. And in the half hour between the first screams and the killer’s final exit, only one neighbor made a move to stop him, by yelling out, “Leave the girl alone,” the comment that caused the killer to flee the first time.

The murder made national news. People were outraged and dumbstruck at the actions — or inaction — of the seemingly ordinary, law-abiding citizens of Kew Gardens. While psychologists studied the case to understand the “Bystander Effect” (also known as the “Genovese Effect”), communities sought to change the urban phenomenon by establishing Neighborhood Watch groups. New York police dispatchers were reorganized to better respond to emergency calls. And Good Samaritan Involvement Day was created as the antidote to the Genovese bystanders.

In the graphic novel Watchmen, Walter Kovacs reads about Kitty Genovese’s murder in the newspaper. Deeply troubled by those who watched it and did nothing, Kovacs fashions a mask from the dress Kitty had left behind and becomes “Rorschach”, a vigilante so-named for the ink-blot patterns on the mask’s strange fabric. His purpose: to punish the evil inherent in humanity while others stand by and watch.

Like the ink-blot test from which the character Rorschach gets his name, people interpret Kitty Genovese’s murder in different ways.

The fictional Rorschach tells a psychiatrist:

“Almost forty neighbors heard screams. Nobody did anything. Nobody called cops. Some of them even watched. Do you understand? I knew what people were, then, behind all the evasions, all the self-deception…”

He writes in his journal:

“This rudderless world is not shaped by vague metaphysical forces. It is not God who kills the children. Not fate that butchers them or destiny that feeds them to the dogs. It’s us.”

“Kitty was the most wonderful person I’ve ever met. I still remember her face. I can see it in my mind… we were together for a year… One year exactly, to the day.

“…I remember I went bowling with a friend of ours and I came home… It was probably 11:30. I went to bed. And the next thing I remember is the police knocking on the door at 4 o’clock in the morning. So they took me to the emergency room, said, “You have to identify her.”

“…I just went home and I started drinking, because I couldn’t deal with this. And I drank for about six months, and I realized this is — what am I doing with my life? So I stopped drinking. I got an apartment, and I went back to school…

“I still have a lot of anger toward people because they could have saved her life… I mean, you look out the window and you see this happening and you don’t help… How do you live with yourself, knowing you didn’t do anything?

“That’s the biggest lesson to be learned from this: really love each other.

“We have to on this planet.”

In an alternate reality we would celebrate Good Samaritan Involvement Day because it marked the day someone did something extraordinary for a total stranger. But as Rorschach could tell you, that’s not the world we get to live in.

Instead, March 13th reminds us that the human tendency to play it safe, to stay inside, to pull the blinds shut, is as strong as the instinct to help one another.

Even the original Good Samaritan himself was a fictional character. He was the comic book hero of his day, the mold of modern-day fictional heroes from Shane to Batman.

Jesus told the parable of the theoretical “Good Samaritan” to say, not that Samaritans were good (The Hebrews of his time disliked the Samaritans.) but that even a Samaritan had the potential to save you. And thus even a Samaritan deserved to be loved as a neighbor.

Blanche DuBois was wrong. We can’t depend on the kindness of strangers. But we can be that good neighbor.