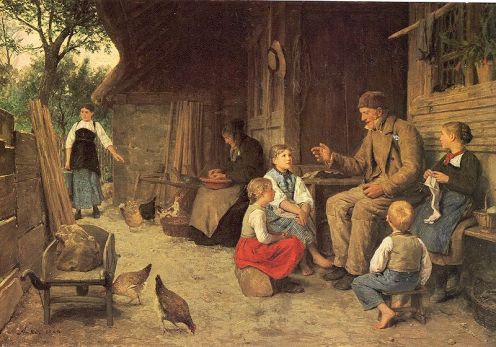 They’re your Grandfolks. They grew up in a very different world from you, two generations removed.

Grandparents Day is a relatively new creation, compared to Mother’s and Father’s Day. Like those two, we have a West Virginian to thank for its inception. Marian Lucille Herndon McQuade lobbied throughout the 1970’s for a holiday that would recognize the contributions of older adults, namely grandparents. In 1979, President Jimmy Carter proclaimed the second Sunday in September “Grandparents Day”.

Unlike Mother’s Day and Father’s Day, Grandparents Day has no apostrophe…

“But it’s an oversight that serves the holiday well. Mrs. McQuade did not envision the holiday as “belonging” to grandparents. Instead, she saw it as a day of celebration involving the whole family, a day to connect the generations.”

The History of Grandparents Day

The September date was chosen to symbolize the autumnal season of life. The Chinese also hold a festival in the ninth month to celebrate and respect their elders. It’s known as Chong Yang, or Double Ninth (9-9). While Grandparents Day in the United States is a minor holiday, largely overlooked in a youth-obsessed culture, holidays that honor elders in Eastern and African cultures have been celebrated for centuries, possibly millennia.

Both in the U.S. and overseas, the roles of grandparents are changing. Many grandparents find themselves as primary caregivers for their grandchildren.

“The number of grandparents raising grandchildren increased by 40% from 1980 to 1990 (National Center for Health Statistics, 1998). In 1996 the NCHS reported that one million American children, lived in a grandparent’s home without a parent present.”

Ellen DeGeneres confirms: “My grandmother started walking five miles a day when she was sixty. She’s ninety-seven now, and we don’t know where the hell she is.”

Henry Youngman tells another success story: “My grandmother is over eighty and still doesn’t need glasses.  Drinks right out of the bottle.”

One thing hasn’t changed. There is a special relationship between grandparents and their children’s children. Sam Levenson theorized, “The reason grandchildren and grandparents get along so well is that they have a common enemy.”

But perhaps as the the truth is less cynical. As anxiety of child-rearing fades and the end seems nearer than the beginning, grandparents are left with a greater appreciation of what truly matters than anyone else on the planet. They respect the purity and simplicity only children possess—or “borrow” really.

“Grandmothers hold our tiny hands for just a little while… but our hearts forever.”

Grandmother’s house (It was always “grandmother’s house”, even though it was just as much grandfather’s) was a treasure trove of goodies: “Junkios”—cereals our parents would never allow—chocolate pudding, jell-o, and every type of candy. Afternoons were spent enjoying the Family Film Festival, where we were introduced to the strange, wonderful cinematic magic of our forefathers.

Nothing could compare to the safety and security of grandmother’s house. Grandparents were all-knowing when we were ignorant. As they age and dip into the irretrievable world of Alzheimers’, it’s sad to watch our roles reverse. Not that we’re wise now, we just know what they taught us.