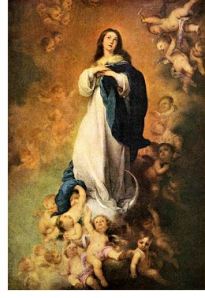 Today, December 8, the Roman Catholic Church celebrates the Feast of the Immaculate Conception.

I know what you expectant mothers are thinking. The Immaculate Conception is December 8. Jesus was born on December 25. A 17-day pregnancy? How do I get in on that!?!

Well, you can’t. Contrary to popular belief, in the Roman Catholic Church the Immaculate Conception refers not to the conception of Jesus, but to that of Mother Mary.

So immaculate or not, gestation takes 9 months.

The Feast of the Conception of the Blessed Virgin Mary has been celebrated at least since the seventh century. But it wasn’t until 1854 that Pope Pius IX officially defined Immaculate Conception:

“The Blessed Virgin Mary, in the first instant of her conception, by a singular grace and privilege of Almighty God, and in view of the foreseen merits of Jesus Christ, the savior of the human race, was preserved free from all stain of original sin.”

This doesn’t mean that Mary’s was a virgin birth, like Jesus’. The word Immaculate comes from the Latin in (not) and maculatus (stained). Mary’s conception, according to Roman Catholic dogma, was a normal one, but she was blessed by God and sanctified from the very moment of her own conception.

Although it’s not explicitly mentioned in the Bible, the Roman Catholic Church cites Mary’s description—being “full of grace”—as evidence for her Immaculate Conception, a blessed state that shielded Jesus from exposure to Original Sin. Protestants disagree on this, and in fact, Mary’s conception has been a major point of contention between the two.

The Feast of the Immaculate Conception is celebrated throughout the Catholic world. In Spain, Portugal, and parts of Latin America December 8 is celebrated as Mother’s Day. In Panama today, Mother’s Day is one of the most important holidays of the year. Writes one mother:

“I just came back from mother’s day celebration in Bocatorito a little village close to us…For the first time in my life I felt the core essence of what this day is all about. A day when you feel loved and special, but not with expensive gifts and going for dinner in fancy restaurants. Here, surrounded by humble people I understood and felt the joy of being celebrated as a mother.”