Yesterday I walked into a church I had never been to before to watch the Inauguration of Barack Obama.

About 200 people were crowded inside. A projector cast a larger-than-life image on the wall behind the altar– a live feed of the inauguration. The crowd was joyful, respectful, and united, as were crowds across the country. It was an unusual scene for liberals, who in recent decades have had a stubborn tendency to reserve pride in their country for moments they felt their country earned it. Today was one of those days.

The speech lived up to its hype:

“extend a hand if you are willing to unclench your fist…”

“reject as false the choice between our safety and our ideals…”

“…in places like Concord and Gettysburg; Normandy and Khe Sanh…”

The man beside me gave a shout of approval. He looked about 50; in retrospect, he must have been 60. Strands of gray seeped from his dark, curly hair; his mustache and goatee were white. He had eye crinkles and big wide smile.

We learn about the battles of Concord and Gettysburg in grade school. My grandfather fought in Normandy. And though I stood at the Vietnam Memorial just two weeks earlier, I’d never heard of Khe Sanh.

Khe Sanh was one of the bloodiest battles of the Vietnam War, and the siege began, coincidentally, 41 years ago today.

North Vietnamese reinforcements arrived in Khe Sanh, reversing the tables. The initial opposing force swelled from a few hundred North Vietnamese soldiers to over 20,000, while the U.S. Marines, Army, and South Vietnamese Army hovered around 6,000.

And second, the North Vietnamese Army launched the Tet Offensive, an all-out attack on South Vietnamese and U.S. strongholds throughout the country that surprised military leaders and demoralized the American public. It also tied up potential U.S. reinforcements.

The U.S. provided intense air support for the ground forces at Khe Sanh. During the 77-day battle the Marines, Air Force, and Navy personnel flew over 17,000 missions, dropping over 30,000 tons of explosives. At one point the possibility of using nuclear weapons was even considered, though that option was taken off the table.

Today “the outline of the airfield remains distinct (to this day nothing will grow on it). In places, the ground is literally carpeted with bullets and rusting shell casings.” — Vietnam, Lonely Planet Travel Survival Kit

What we do know is by the end of the battle on April 8th, when U.S. reinforcements finally arrived, over 2,000 U.S. Servicemen lay dead or wounded at Khe Sanh. And the North Vietnamese Army suffered over 5 times that loss.

The war raged on for another 6 years. The U.S. pulled out of Vietnam in 1975, and many veterans returned home, not to cheers, but jeers.

After the President’s speech, Elizabeth Alexander read the Inaugural Poem, Praise Song for the Day:

Each day we go about our business, walking past each other, catching each others’ eyes or not, about to speak or speaking. All about us is noise…

With your hands of power and your heart of love, help us then, now, Lord, to work for that day when nations shall not lift up sword against nation, when tanks will be beaten into tractors, when every man and every woman shall sit under his or her own vine and fig tree and none shall be afraid, when justice will roll down like waters and righteousness as a mighty stream.

We watched the U.S. Navy Band begin the National Anthem and heard its opening lyrics. “O say, can you see…”

At which point the sound from the video feed, which had been touch and go during the Inauguration, gave up for good. An audible groan filled the silence. But then, quietly, another sound.

Not from the video speakers, but from within the church. From us. In the silence, the entire church stood and sang the National Anthem, without any leader, without any audience, without any musical accompaniment.

We didn’t need sound, because we all knew the words.

Some in this crowd had been deemed unpatriotic for speaking up for their beliefs during the long campaign. From the Vietnam veteran to the soccer mom, here they were in a church singing the National Anthem for no audience but themselves.

These people loved America. And they felt the thrill Francis Scott Key must have felt, when he peered from the ship where the British confined him, and saw the flag of his country waving proudly over Fort McHenry. 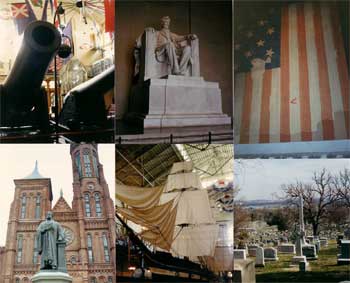