“Liberation Day (February 26) celebrates the liberation of Kuwait by a multi-national force from seven months of traumatic Iraqi occupation on February 26, 1991. Each year the day is marked with public gatherings and get-togethers. However, the day is also tinged with sadness as Kuwait remembers and honours the martyrs who lost their lives fighting Iraqi oppression and the 605 Prisoners of War still held captive in Iraqi jails.”—http://ikuwait.blogspot.com/2007/02/kuwait-deserves.html

This week Kuwait celebrates not one but two national holidays: National Day and Independence Day.

National Day celebrates independence of Kuwait from Britain in 1961 and the reign of Sheikh Abdullah Al Salim Al Sabah, the Emir who guided Kuwait during this transformation and who earned the moniker “Father of the Constitution.”

On this day teens and adolescents celebrate by spraying untold volumes of silly string on passing motorists on the Gulf Road. What the connection is, I don’t know, but as one motorist writes:

“…despite our best efforts to avoid gulf road, there is no getting away [from] these foamy sprays. They will run after you. Chase you down the road. They will even open your door, because having white foams sprayed on your car interior is even funnier than the outside.”
http://anafilibini.blogspot.com/2007/02/kuwait-national-day.html

The area that is now Kuwait was largely uninhabited up until the 18th century although archeologists have found indications of settlements as far back as 4500 BC.
The same family of Sheiks have ruled Kuwait since the 1750s, when Kuwait’s location on the Persian Gulf made it a thriving port. The sovereignty of Kuwait gets shady in the late 19th century due to conflicting claims by the Ottoman and British Empires and by Kuwait itself. 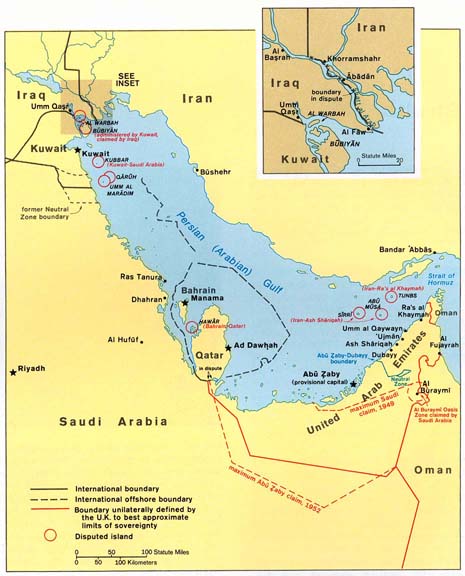 (Kuwait and the Persian Gulf)

Kuwait enjoyed the ambiguous status of a “caza,” an autonomous city by the Ottoman Empire, but in 1899 it began a fungible relationship with Britain, sacrificing some autonomy in return for British naval protection. Britain wanted to secure access through the Gulf—a major transit point between England and India—and block Germany and its Ottoman allies.

In the 1930s the discovery of oil changed the fate of the country overnight. At that time pearl-diving was a leading occupation for Kuwaitis; two decades later the small nation would be one of the largest oil exporters in the world.

Kuwait gained independence from Britain on June 19, 1961, and the following year Kuwait became the first country in the Gulf region to adopt a Constitution and parliament.

In 1974 Kuwait nationalized the Kuwait Oil Company, created by British Petroleum and Gulf Oil in 1934.

Thirty years after independence Kuwait suffered another threat to its sovereignty. Iraq invaded its neighbor to the south after the country refused to reduce their oil exports.<

Iraq had tried to lay claim to Kuwait immediately after it declared its independence in 1961, but annexation attempts were blocked by the UK. According to British diplomat Sir Anthony Parsons, “In the Iraqi subconscious, Kuwait is part of Basra province, and the bloody British took it away from them.”

Kuwaitis insist they were never a possession of the Ottoman Empire.

Following 7 months of occupation a U.S.-led coalition invaded Iraqi-occupied Kuwait. After only a few days of fighting Saddam Hussein pulled his troops from the country on February 26, 1991. Since then February 26 has been celebrated as a second Independence Day or Liberation Day.

Other facts about Kuwait:

National elections are held every four years for the 50-member parliament. The Prime Minster and President are appointed by the Emir.

The population skyrocketed from 200,000 to 3 million over the past 50 years. An estimated 2 million are non-nationals. Residents must have lived in the country for 20 years to vote.  Women weren’t granted suffrage until 2005.

Despite being the first democracy in the region, political parties are not allowed. A defied the ban in 2005, creating their own party, and were arrested for plotting to overthrow the government. 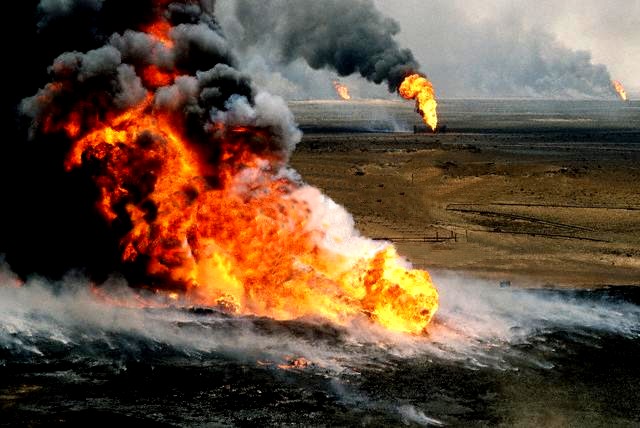 Upon leaving Kuwait in 1991 Hussein’s army set Kuwait’s oil reserves ablaze. Kuwait underwent massive infrastructure redevelopment to recover from one of the worst environmental disasters in the 20th century.

The country is predominantly Sunni Muslim.

An expat in Kuwait on the eve of National Day