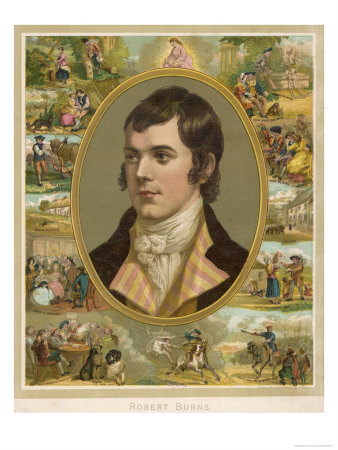 Without ever picking up a sword or musket, Burns became a national hero of the Scots. His weapon was the pen. His ammunition the Scottish language. (Yes, they have their own language).

Even in Burns’ day the Scots language (a collection of dialects such as Doric, Buchan Claik, and Lallands) had lost favor with the upper crust. The 1707 Treaty of Union had united Scotland with England to form the Kingdom of Great Britain, and the new establishment, for fear of sounding provincial, distanced themselves from the ‘auld’ dialects. English became the de facto language in education, and the language itself was blending with that of their neighbors to the south.

Robert (Rabbie) Burns entered the world on this day, 1759. His father was a gardener and an unsuccessful farmer, but he managed to secure an education for Robert, the first of his seven children at the village school.

“Forming a bachelors’ club and debating society at Tarbolton, young Robert became a Freemason, worked as a flax dresser in Irvine and enjoyed an active social and sexual life.”

The Canongate Burns By Andrew Noble

After his father’s death, Rabbie was forced to return to farming to support the family. It was during these years that he wrote some of his most famous poetry. (And conducted some of his more fruitful love affairs.) He also scoured the countryside collecting the traditional folk songs of his people, which would have otherwise been lost to history. His collection, Poems, Chiefly in the Scottish Dialect earned him rapid fame, but not fortune.

Unlike the born-wealthy poets of his day, Burns earned very little from his writing. He continued to farm, and when the farm failed, he became an excise officer in Dumfries. His romantic, radical, idealist persona fostered by his works did not always match his life. Burns is often described as having a “weak heart,” but this did not dim his sexual escapades. He bore numerous prodigy by several women, including his long-suffering wife, Jean Armour, who bore their last child together on the day of his funeral.

from Bonie Jean: A Ballad

There was a lass, and she was fair,

At kirk or market to be seen;

When a’ our fairest maids were met,

The fairest maid was bonie Jean…

…As in the bosom of the stream,

The moon-beam dwells at dewy e’en;

So trembling, pure, was tender love

Within the breast of bonie Jean…

Burns passed at age 37 in 1796, leaving behind a romantic image of himself no man could match and a country beaming with nostalgic pride.

The first Burns’ Night was held five years after Burns’ death by a group of his close friends. They celebrated as Scots around the world will celebrate tonight:

from A Bard’s Epitaph…

…Is there a man, whose judgment clear

Can others teach the course to steer,

Yet runs, himself, life’s mad career,

Wild as the wave,

…’Wha, for Scotland’s king and law,

By Oppression’s woes and pains!

By your sons in servile chains!

We will drain our dearest veins,

But they shall be free!

Tyrants fall in every foe!

Liberty’s in every blow!

Let us do or dee!

That hackney’d judge of human life,

The Preacher and th King,

Observes: “The man that gets a wife

He gets a noble thing.”

But how capricious are mankind,

We married men, how oft we find

The best of things will tire us!

from A Poet’s Welcome to His Love-Begotten Daughter

Tho’ now they ca’ me fornicator,

An’ tease my name in kintry clatter,

The mair they talk, I’m kent the better,

from A Red, Red Rose

As fair art thou, my bonnie lass,

So deep in luve am I;

And I will luve thee still, my dear,

Till a’ the seas gang dry…

burnspoety.com – a Poet for All Men

Index of Burns’ Work – read it

How to Organize a Burns Supper – celebrate it

Burns Night – reflections on his poetry

0 Replies to “in nights of Auld Lang Syne – Rabbie Burns, a Great Scot”