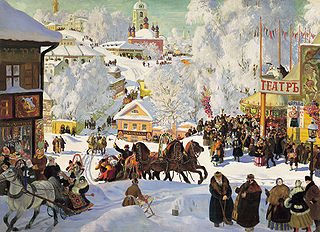 There’s no Mardi Gras or Carnival in Russia. Lent doesn’t descend on Orthodox Christians in one big swoop as in Catholicism, but in a series of events with increasingly strict regulations.

The Sunday after Meatfare is Cheesefare Sunday, the last day for eating dairy products.

In Catholic communities the Tuesday before Ash Wednesday is sometimes called Pancake Day, while in Orthodox Russia the whole week before Lent is known as Maslenitsa (Butter Week) or Blini Week (Pancake Week). [Blini has the same root as ‘blintz’.] During Pancake Week Russians empty their pantry of milk, eggs, butter, and other Lent no-no’s, by throwing them into a bowl and mixing them to make pancakes. Russian pancakes are closer to what we would call crepes.

The late-Februay/early-March celebration combines Christian theology with an ancient pagan tradition of welcoming the spring.

Maslenitsa comes to a close with Vespers on the evening of Cheesefare Sunday.

In Orthodox communities this is also known as Forgiveness Sunday. During the evening ceremonies church-goers face and verbally forgive one another for anything the year before.

The Orthodox Great Lent begins on a Monday rather than a Wednesday, and is called Clean Monday.

One Reply to “Pancake Week”