Perhaps because of the plurality of the attacks—four planes, three locations, and two landmarks of national significance—no single name summed up the tragedy of 9/11 better than the date itself. Today “September 11” refers the attacks on the Twin Towers and the Pentagon, and the plane crash outside of Shanksville, Pennsylvania. It means the extinguishing of thousands of innocent lives in a single morning.

But long before 2001, in fact before the pilgrims set foot on American shores, September 11 was already a pivotal date in American history.

Over 400 years ago on September 11, a ship by the name of Half Moon anchored in what is now New York Harbor, just north of a quiet island inhabited by a tribe known as the Mannahattes. Henry Hudson was about to take the first documented European journey up the river that would be named for him.

Spanish explorers had already reported the existence of the “Grand River”, but Hudson was the first to travel inland. He was an English navigator hired by the Dutch to find a passage to India; he hoped he’d find it up the Hudson.

The Half Moon sailed up the Hudson River, trading with some tribes, shooting at others. (One crew member had been shot through the neck with an arrow a few days before, an incident which colored the crew’s impressions of early Hudson Valley residents.) They never did find the route to India, but they did find Albany. At which point the river became too shallow and the ship turned around.

On his way out of New York harbor in October, another, more serious fight occurred between Half Moon and the indigenous residents—most likely the Mannahattes–the tribe living on the island that would become–you guessed it: New Amsterdam. The small battle was serious enough that the locals had not forgotten it when the Dutch came around 15 years later to “buy” the island of Manhattan for 60 guilders worth of goods.

Before returning to Holland, Hudson stopped in his homeland of England. As a fitting symbol of Hudson’s life, he never got to where he was going. Upon arriving in England, he was greeted, not as a hero but as a traitor, for sailing a craft under a foreign flag, and was promptly arrested.

Hudson’s journey is the reason why New York grew up Dutch before it was English.

The English did let Hudson out to do more exploring, to find that well-hidden secret passage to India, this time for the British crown. He spent several months exploring what would become “Hudson Bay” in Canada, lured north by the indigenous rumor of a river that ran to an “ocean”—probably referring to the Great Lakes.

After close to a year of exploring the Hudson Bay, his crew were getting homesick (and if you’ve spent a winter in Hudson Bay, you know why).

The crew mutinied. They placed Hudson, his son, and seven loyal crew members on a small boat, set them adrift, and sailed back to England. Hudson, his son and the men were never seen again.

The story of North America is in some ways the story of the Northwest Passage, the most famous passage that never was. The hope of a quick and easy waterway between Europe and India was the dream of kings and merchants alike for hundreds of years. The reward for a man who could find it would be wealth and fame beyond imagination.

But like the Fountain of Youth and the City of El Dorado, the Northwest Passage would elude every explorer from Columbus to John Franklin. Many devoted their lives to searching for a route that any child on Google Maps today can see never existed.

(There would be no direct water route between Europe and India until the Suez Canal was built in 1869, connecting the Mediterranean to the Persian Gulf. Ironically, this miracle of modern ingenuity had been preceded by a canal built by the Ancient Egyptians thousands of years earlier, which fell into disuse around the time of Cleopatra, filled with silt, and was forgotten.)

We are taught as children that the building of North America was based on freedom of religion, but it was based on trade. The first explorers came here seeking a trade route to the Orient. Then governments sought precious metals and untapped resources. Finally, immigrants came seeking a social and economic system that would allow those without resources or aristocratic blood an opportunity to attain wealth.

You can tell what a society values most by the size of its buildings. Once cathedrals soared highest about medieval cities. Today those are dwarfed by centers of commerce and business. When terrorists attacked America, they didn’t strike our churches. They struck the World Trade Center, knowing full well this was the heart of America.

John Locke wrote that each member of society is entitled to “life, liberty, and the pursuit of property.” In the Declaration of independence, Thomas Jefferson changed that last bit to the “pursuit of happiness.” Was he exercising poetic license, or did he think property and happiness were interchangeable? Either way, the Declaration guarantees neither wealth nor happiness, only the pursuit thereof. Perhaps one day some child will be watching the whole course of human endeavors on ‘Google EverythingThatEverHappenedInHumanEventsDownToTheMolecule’ and mock our futile search for one or the other, silently bemoaning, “Had they only turned left at Albuquerque…”

Till then, appreciate what’s already at your fingertips:

Thanks to science, ingenuity, and commercial enterprise, the average citizen today has access to information and knowledge that was hopelessly out of reach of the most powerful kings in history. You can see almost any stretch of the globe at the push of a button, and many stretches in space, millions or billions of miles away. You have access to an unprecedented cornucopia of foods and flavors, savoring in one meal what a Caesar could not have enjoyed in a lifetime. You carry on a conversation with someone halfway across the world in two minutes, that would have taken an emperor decades.

Economist Thomas Friedman says “The World is Flat.” That trade has made the world a much smaller place. Average citizens interact with other cultures and countries on a daily basis, thanks to the internet and global communications. John Locke’s selfish pursuit of property may be in the end the greatest tool for global understanding the world has ever known.

When the Twin Towers fell, they took with them the citizens of 90 countries, morbid proof that the world is a small, small place. 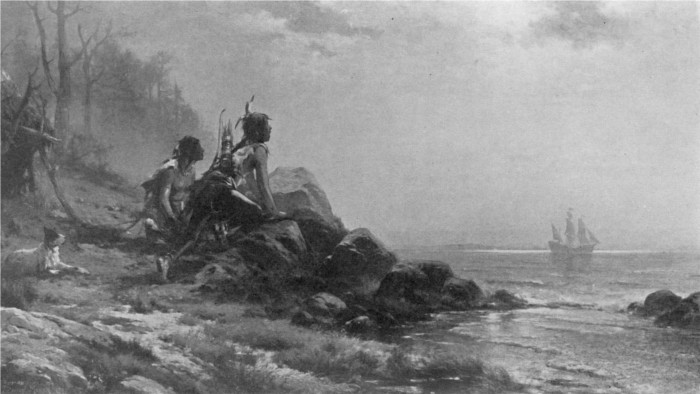 where navigating
toward soon-
to-be harbor