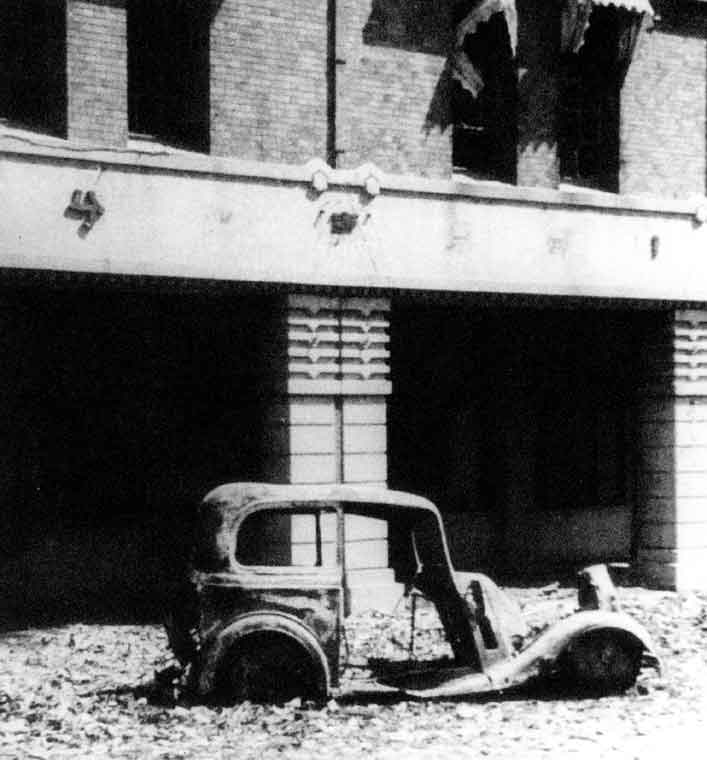 It started with a woman selling cigarettes.

February 27, 1947: Lin Jian-Mai was peddling black market cigarettes at a portable stand on Taiping Road in Taipei, Taiwan (then Formosa), when she was caught and arrested by anti-smuggling police from the “Kuomintang” (Chiang Kai-Shek’s Nationalist Chinese government). During the arrest she yelled and struggled with the agents, who had taken her wares and her cash. As a gathering crowd watched the commotion, an overzealous agent pistol-whipped the woman, hard.

The angry crowd surrounded the officers, who then fired warning shots to make an escape for themselves. One of the shots hit and killed a pedestrian.

Word of the incident spread. People were already angry at the corruption of the Chinese government, and the living conditions that had necessitated the black market.

A mob gathered outside the police station, demanding the guilty officer be brought out. When their demands were refused by the captain, the crowd grew angrier and set fire to a police vehicle.

The next day, February 28, amid anti-government demonstrations, the Governor’s security force fired upon the demonstrators with machine guns. Formosans rebelled, attacked mainlanders, and took over part of the city’s infrastructure. On March 7 Chiang Kai-Shek’s army arrived from mainland China for back-up. That’s when the slaughter really began.

The beating of the cigarette vendor may have triggered the 228 Incident, but tensions leading to something like this had been brewing for two years, ever since Chiang Kai-Shek’s government won back Taiwan in 1945 after a half-century of Japanese control.

Corruption and nepotism grew rampant. Taiwan was treated like a colony of the mainland. The Governor Chen Yi controlled the island’s economy and forced Formosans to pay unimaginable amounts for common  goods. The Taiwan Company, for example, was run by Governor Chen’s nephew. The company bought coal at 200 yen a ton and sold it to the people for 4,000.

“With his Chinese aides and ‘monopoly police’ [Chen] took over and expanded the Japanese system of government industrial and trade monopoly (sugar, camphor, tea, paper, chemicals, oil refining, cement). He confiscated some 500 Jap-owned factories and mines, tens of thousands of houses.”

Chen ran everything from “the hotel to the night-soil business.” And that included the cigarette factory.

It was in this crucible that Chen’s monopoly police beat a woman vending non-sanctioned tobacco—cigarettes that weren’t manufactured by Chen’s government-run companies. It was the spark that set the island aflame.

When Chiang Kai-Shek’s troops arrived from mainland China, they engaged in:

“‘three days of indiscriminate killing and looting. For a time everyone seen on the streets was shot at, homes were broken into and occupants killed. In the poorer sections the streets were said to have been littered with dead…There were instances of beheadings and mutilation of bodies, and women were raped,’ said one American witness.”

Witnesses estimated as many as 10,000 people were killed. But there are no official tallies. The government banned Formosans from even mentioning what came to be known as the 228 Incident.

The riots and massacres would trigger the era of “White Terror” in Taiwan. The violence was further fueled by the Chinese Civil War between Mao Zedong’s Communist army and Chiang Kai-Shek’s Nationalist forces. The Communists eventually won everything but the tiny island of Taiwan, which calls itself, the Republic of China.

…I am reminded of the brief note I put down on my diary after seeing the movie, The Last Emperor. The note simply says, “A good and interesting movie, but a wrong title.” By a wrong title I meant that Pu-yi was not the last Emperor of China; there have been many since…One would include among them, Yuan Si-kai, Chiang Kai-shek, Mao Zedong and Deng Xiaoping. Each of the them certainly behaved as emperor and wanted others to so treat him. The tradition of authoritarianism of the ruler is still deeply engrained in the minds of both the rulers and the ruled in Chinese culture. A forceful example can be found as recently as June 4, 1989 at Tienanmen Square. For the rulers, only glory and power count. Human rights, freedom of equality or respect for the lives of people have to surrender to the might of the rulers.”

—Tsung-yi Lin, from the Preface to Formosa Betrayed, by George Kerr