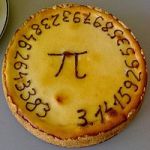 July 22, or as it’s affectionately called across the Atlantic, 22/7, is Pi Approximation Day. But don’t let the name fool you. Unlike the more widely celebrated Pi Day (observed on March 14), 22 divided by 7 is actually a slightly closer approximation of Pi than 3.14.

The tradition dates back at least to 1995, when students at Chalmers University of Technology in Gothenburg, Sweden, celebrated July 22 by

“eating waffles and consuming Swedish Punch in various highly unlikely ways. There was also agitated discussion about how circles would look, if the ratio of their circumference to their diameter would equal 3.”

It just doesn’t get wilder than that. Later observances included the creation and digestion of the obligatory “Pi Pies”.

More historical documentation of these early Pi Approximation Day events can be found at: