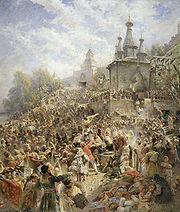 Russia’s current incarnation of Unity Day dates all the way back to the early 21st century. Yep, it’s fairly new in that respect, but the reason for the celebration goes back to 1612.

In the early 17th century Russia faced full-scale invasion from its Polish-Lithuanian neighbors to the West. These days it’s hard to think of Russia as threatened by Poland and Lithuania, but in 1569 the latter two formed a mighty union known as the Polish-Lithuanian Commonwealth.

The Polish army got as far east as Moscow, and surprisingly 5000 Polish cavalry defeated a force of 35,000 Russian soldiers outside the city, a devastating loss to the Russian army and public morale.

This was known as the Time of Troubles in Russia, referring to the period when Russia lacked a Tsar. Tsar Feodor Ivanovich died in 1598 without heir. The Romonov dynasty would not emerge as the clear leader of the country and reestablish the Tsardom until 1613.

In 1612 a local merchant named Kuzma Minin gathered a ragtag volunteer “national militia” to fight against the Poles. Led by Knyaz Dmitry Pozharsky, the group laid siege to the city and finally ousted the the Poles from Moscow in October (Old Calendar) that year.

The Russians began celebrating the anniversary of the ouster on October 22 (Oct. 22 O.S./Nov. 4 New) in the generations thereafter.

After the formation of the Soviet Union the celebration lost popularity in favor of the anniversary of the 1917 October Revolution.

Today the main square of the Kremlin is named for Minin and Pozharsky, though Pozharsky gets the short end of the deal, as it’s known colloquially as Minin Square.