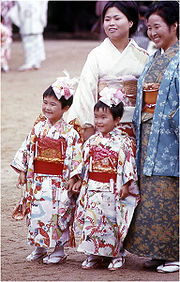 The holiday celebrates the transition of Japanese boys and girls to the next stages of childhood. The tradition centers around five year-old boys, seven year-old girls, and three year-olds of both genders.

In olden days, Japanese babies’ heads were routinely shaven for the first two to three years of their life. At age three, children of warrior families (age two for children of the court) would observe kamioki, aka “leaving the hair”. On the fifteenth day of the eleventh lunar month, families prayed for a long life for the child; children would wear special wigs for the occasion. After kamioki, the child’s hair was allowed to grow out.

For the older children, five year-old boys and seven year-old girls continue a variation of the ancient himotoki tradition, in which children would tie their own belt, symbolizing their entrance into the next stage of childhood. These ceremonies are generally performed at a special shrine.

“In the early Edo period, these rites, known collectively as shichi-go-san, were the preserve of the court and warrior families. Later, they caught on amongst the wider urban population…It was not until the Meiji period, however, that it became a nation-wide phenomenon.”