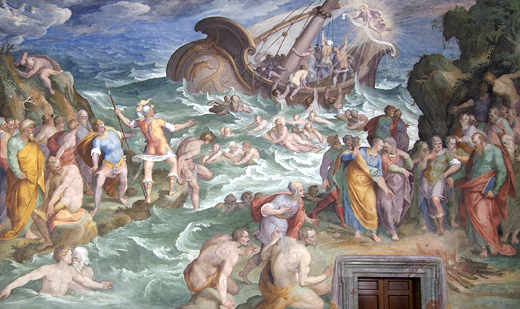 Just sit right back and you’ll hear a tale
A tale of a fateful trip
That started from Judean port
Aboard a Roman Ship.

The weather started getting rough,
The Roman ship was tossed.
Because of the sermons of the fearless Paul
Not a single life was lost.

Reminded this was nothing to
His Savior’s sacrifice
Paul introduced the pagans there
To eternal life with Christ.

St. Paul (the artist formerly known as Saul of Tarsus) was one of the worst persecutors of Christians before his miraculous conversion on the road to Damascus. The former Bad Boy of Tarsus is the only Apostle never to have toured with the living Jesus; yet he has more New Testament works attributed to him than any other author. At least 7 NT books are attributed to Paul, and he’s credited with having written or inspired another 8, making him responsible for up to half of the New Testament’s 27 books.

In the late 50s AD, the Apostle Paul was nearly stoned to death by his fellow Jews for bringing Gentile into a Jewish Temple. He demanded his right to be tried before a Roman court, hence his journey across the Mediterranean around 60 CE.

Because of the shipwreck, Paul was a few years late for his court date. He continued proselytizing in the Mediterranean before being tried in Rome. He lost his head during the reign of Nero, around 64 or 67 AD.

St. Paul is the patron saint of Malta, and the bay where he is believed to have crashed still bears his name.

February 10th is celebrated in the Roman Catholic Church as the feast day of the Shipwreck of Saint Paul, and it’s a national holiday in Malta. On this day each year the statue of St. Paul is carried in a procession through the streets of Valletta.

2 Replies to “Shipwreck of St. Paul”